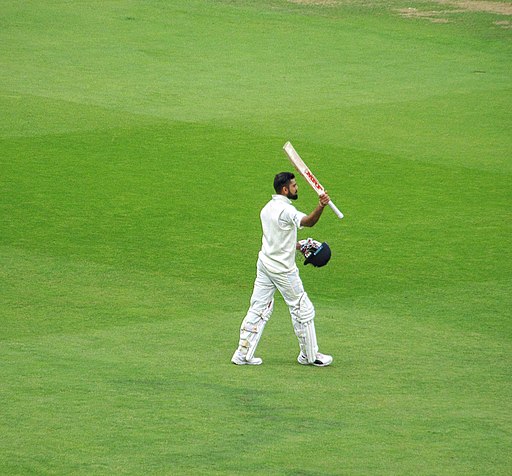 The records Virat Kohli is smashing doesn’t seem to end anytime soon. Virat Kohli’s recent 85-run knock was his 25th T20I half-century.This was the Indian Captain’s record, in terms of most 50-plus scores in the truncated format of the game. Famed Sports Astrologer and Strategist, Hirav Shah is of the opinion that, Virat Kohli has indeed set ‘Virat’ achievements in Cricket.

Meanwhile, when Virat Kohli completed 12,000 ODI runs on Wednesday, the fastest to the feat and in 58 fewer innings than Sachin Tendulkar, the buzz was mostly academic. It’s because Kohli has got the audience accustomed to his greatness, so much so that the 12k-milestone seems just another conquest.

With Kohli, in the 50-over game, it has always been about what records he would end up with rather than the ones he could break. By the time the 32-year-old retires — given his high fitness and motivation levels, he has a long way to go — he would have owned most records in the format. Already, he’s just six centuries shy of breaking Tendulkar’s world-record tally of 49 hundreds. Given his century-striking rate, he could surpass the man he grew up idolising as early as next year.

On that note, Top Sports Adviser, Hirav Shah Opines, Kohli is not only the king of records, but also he is such a big bundle of entrepreneurial qualities and a great inspiration as well, for millions of businessmen to learn and imbibe from like:

No matter what’s the format, Kohli maintains a consistent batting average — be it ODI (59.3), T20I (50.5) or Test (53.6). Kohli adapts himself with the kind of format and gives his best. He never lets the changing conditions bring his performance down!

Adapting to changing business scenarios and technological developments is what drives entrepreneurs forward and keeps them from extinction. And, an entrepreneur’s reputation rests on how consistently he or she performs and delivers what is promised to customers. That’s surely one of the greatest lessons an entrepreneur should integrate into the soul of his venture!

2. Elevating Your Own Bar

Anyone would agree that Virat Kohli has been breaking boundaries, astounding every one. Take the example of how he brought a paradigm shift in how fitness is viewed in Indian cricket. His unusual training methods shock others, making him one of the fittest cricketers in India.
Kohli started using a high-altitude/elevation mask, through which he can vary the load to his respiratory muscles by controlling the airflow. He pushes himself to work under highly challenging breathing conditions. This made him so fit that he takes doubles when others could do only singles!

Entrepreneurship is essentially about aiming higher and higher and never settling down so that the society, city or Nation is impacted in a profound way. Every great entrepreneur who ever ‘made a difference’ believed that there is much more to be achieved. And that drives them forward to accomplish more and more. How else the world-changing breakthroughs in technology and business are even possible?

As an entrepreneur, you are an opportunity-seeker and there’s a huge uncertainty to face throughout your journey. Things will go wrong, you may miss to add that one ingredient or add the wrong one. But, have you learned your lesson?
Having a ‘willingness to learn’ attribute is critical to the success of an entrepreneur. As an entrepreneur, you need to innovate and constantly learn to stay ahead of your competitors.

Kohli’s schedule is managed to the minute. Not a single moment is wasted and is maintained at an impressive precision. How else could he lead and play Cricket for India in all formats, and IPL, put philanthropic endeavours through his ‘Virat Kohli Foundation’, venture new businesses like ‘WROGN’ and ‘Chisel’, do endorsements and media appearances? Surprisingly, he also invests in his other favorite sports, football and tennis, and engages with his fans through FanBox! He has invested in a London based social media startup ‘Sport Convo’ and a kids’ fitness startup ‘Stepathlon’. Also, he co-owns UAE Royals and Indian Super League (ISL)!

Managing time insanely well, is the need of the hour. Sometimes, we forget to manage our time — given it is one of the scarcest resources we have — and we tend to do that often. As an entrepreneur, you got to take up many roles and responsibilities that are full of challenges. Managing your time efficiently is key to success.

Cover drive, square cut, pull or hook — you name the batting shot, Virat Kohli has mastered them all. Behind all his success and fame, there’s sweat. There’s self-discipline and endless hours of practice in the nets, improving his fielding skills and rehearsing his strokes! Kohli’s cricketing brain and clever Strategies at the hour of need couldn’t have made a big difference without his hard work off screen.

Startups are emblems of hard work, of course with passion and ambition at their heart. As an entrepreneur, you have to spend enormous amounts of time, from ideation to execution and beyond. Success and fame follow the trail of hard work.

But is that enough today, one may ponder !!
No, in today’s trying times to be “Victorious”, you need certainty and clarity of the future as well, before implementing any massive business strategy, Says Celebrated Business Astrologer, Hirav Shah.

Success happens when you are able to use yourself to your full potential, not just in life but also in business.

And, Who doesn’t want to experience success in business(of any kind) ?
But, are you truly doing the right things to get there?

The Most Effective B2B Marketing Strategies