Why unsold houses stock is piling up?
What are the causes of delay in projects?
What Can you Do When A Project Is Stuck?

Get all your questions answered by

Why unsold houses stock is piling up?

What are the causes of delay in projects?

What Can you Do When A Project Is Stuck?

Get all your questions answered by

Be it Housing, Retail, Hospitality or Commercial – Real estate is everywhere. This sector has amassed global recognition and its growth has become key to any country’s economy and is a focus of every financial budget. That is what makes the Real estate sector so close to the heart. 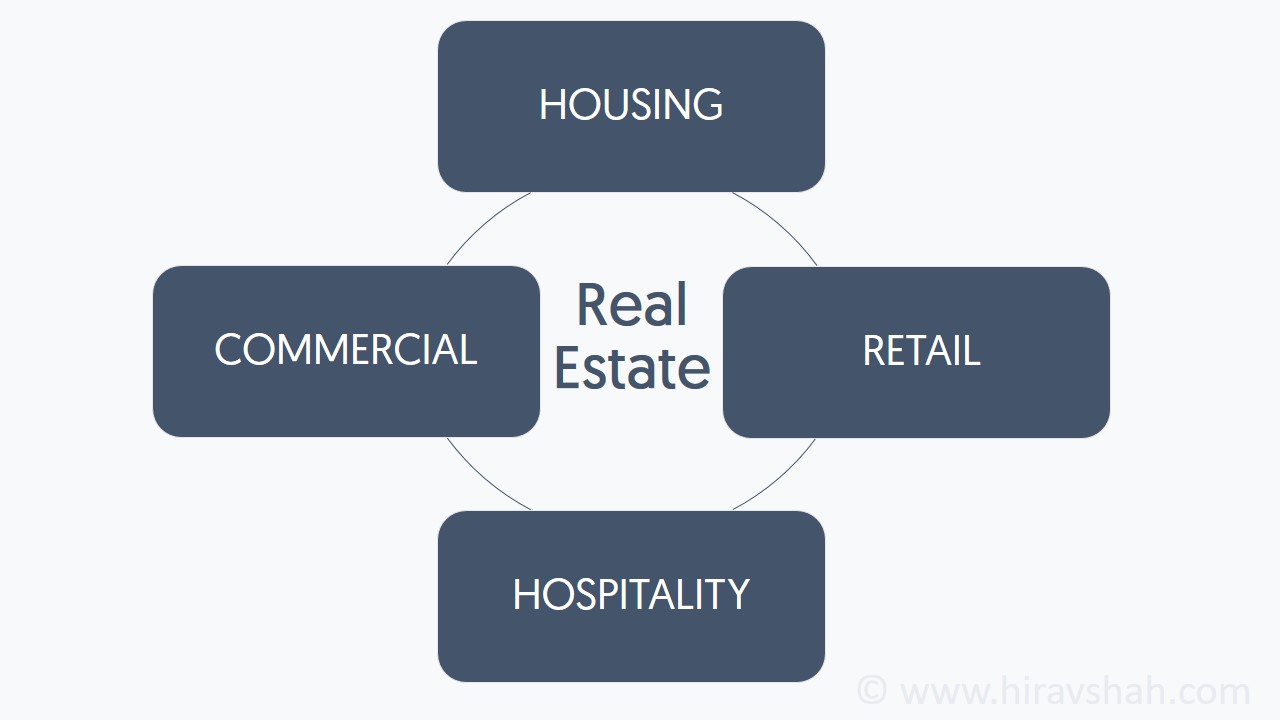 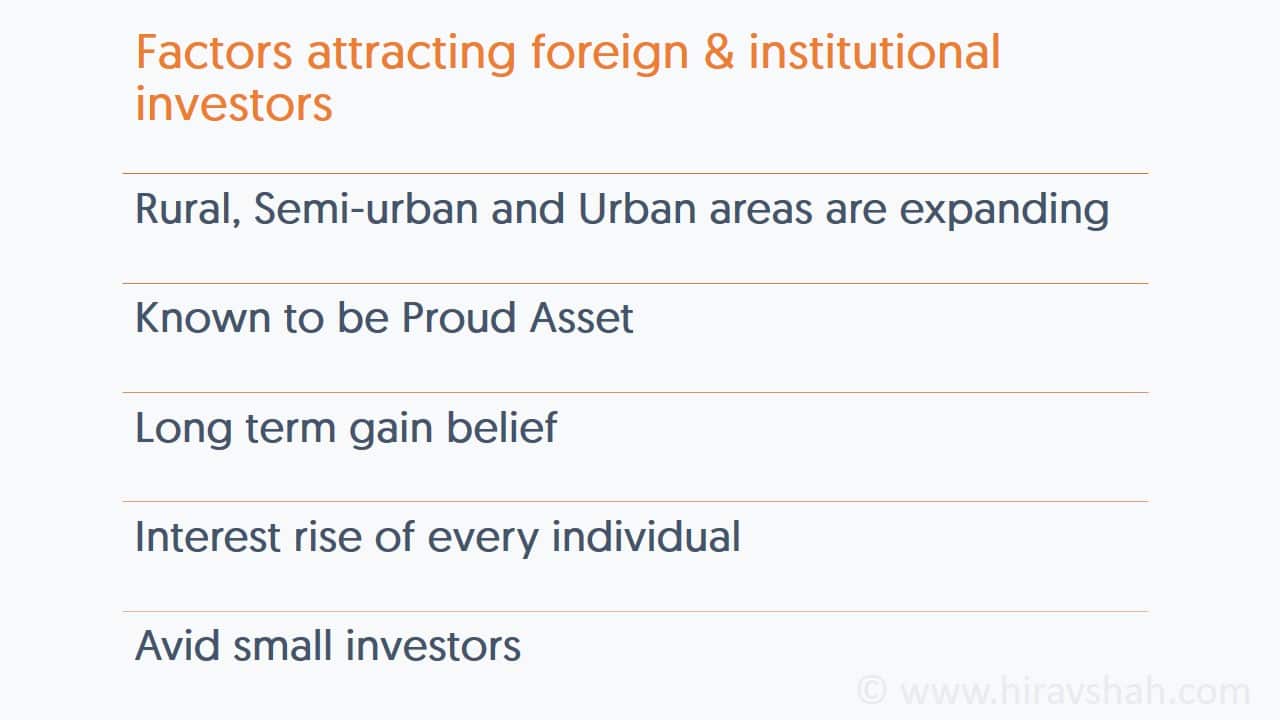 Rural, Semi-urban and Urban areas are all developing at a very fast pace in India. The infrastructure is connecting all three, leading to the rise of interest and investment in the sector. The sector focused policies, the long term gains and the very fact that Real estate is a proud asset, are all the reasons why leading companies in India are focusing on Real estate development and foreign investors are also keen on it.

While the market size of the Real estate sector in India was US$ 120 billion in 2017, it is expected to reach a whooping US$ 1 trillion by 2030. This will contribute 13 per cent of the country’s GDP by 2025. The fast growing retail, hospitality and commercial real estate will fulfill the infrastructure needs of developing India.

India is home to the ‘Silicon Valley of the east’ and that has been responsible for an immense need in commercial spaces, along with the increasing number of start-ups and manufacturing units established in the recent years. The demand for office and retail spaces is only increasing with time and generating great revenues to the Real Estate sector and the Government.

With every financial budget, The Government of India along with the governments of the respective states has created policies and initiatives to encourage development in the Real Estate sector. For example, The Smart City Project, Affordable housing project, PMAY, reduced home loan rates etc. 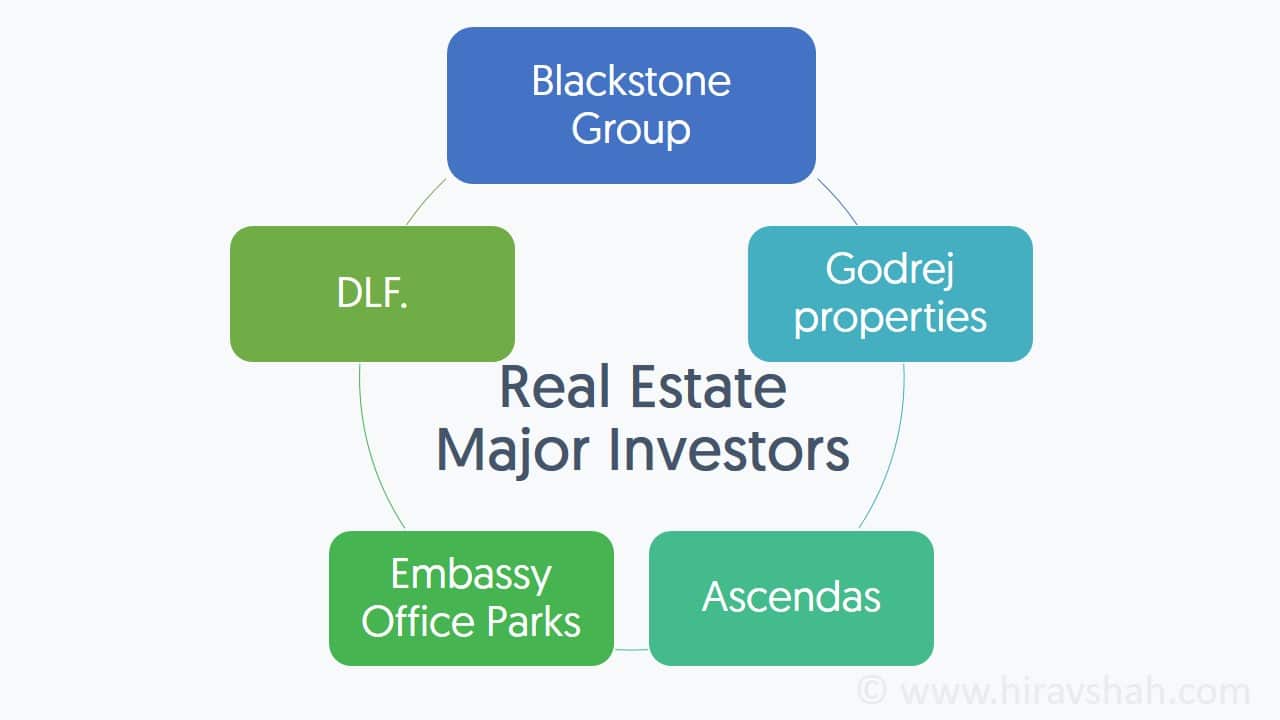 The demand for both office spaces as well as residential spaces has risen, giving much needed momentum to the Indian real estate sector. The period between Jan-Mar 2019, saw a major increase in Private Equity and Venture Capital investments in the sector. Apart from institutional investments over the years, the Foreign private equities have become quite attracted to the sector in recent years. Some of the major investors are Blackstone Group, Godrej properties, Ascendas, Embassy Office Parks and DLF.

The rise in nuclear families, the wave of urbanisation and increase in the household income have become the drivers of growth in the Real Estate sector in India. The CAGR is expected to rise by 19.5% from 2017 to 2028. NRI investments are also set to increase and certain cities like Bangaluru will be favoured more, followed by Ahmedabad, Pune, Chennai, Goa and Delhi. 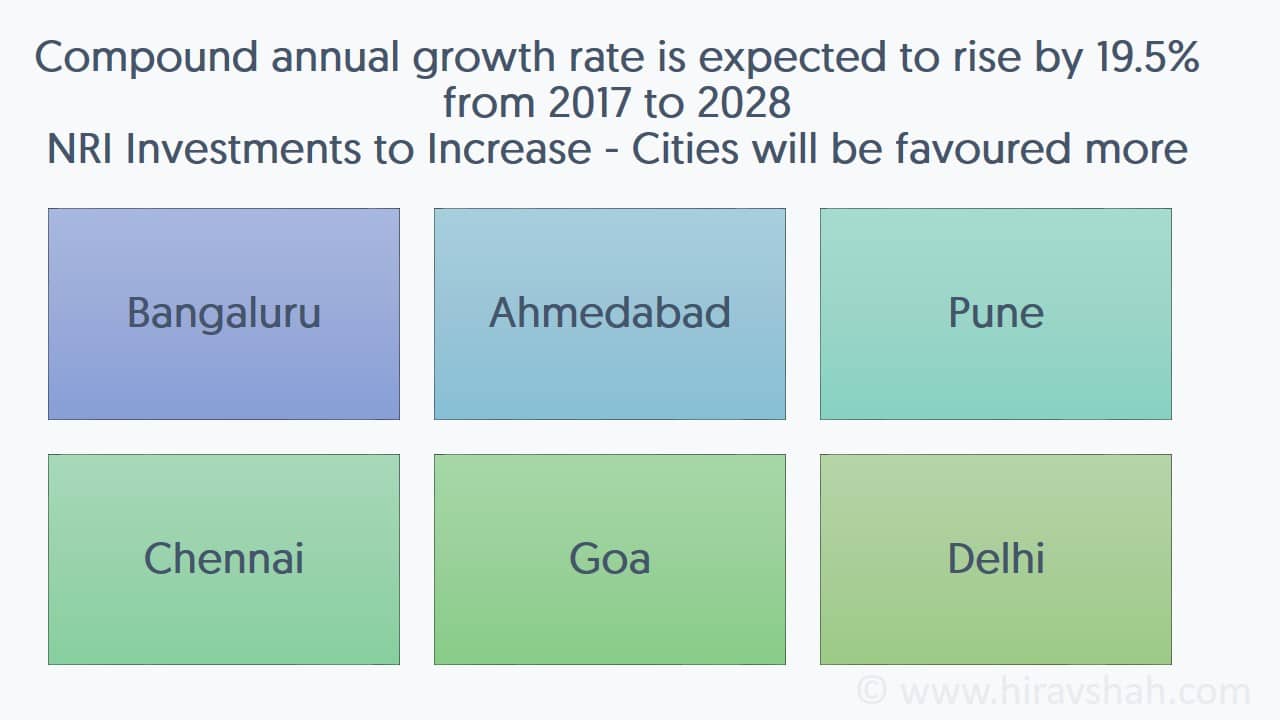 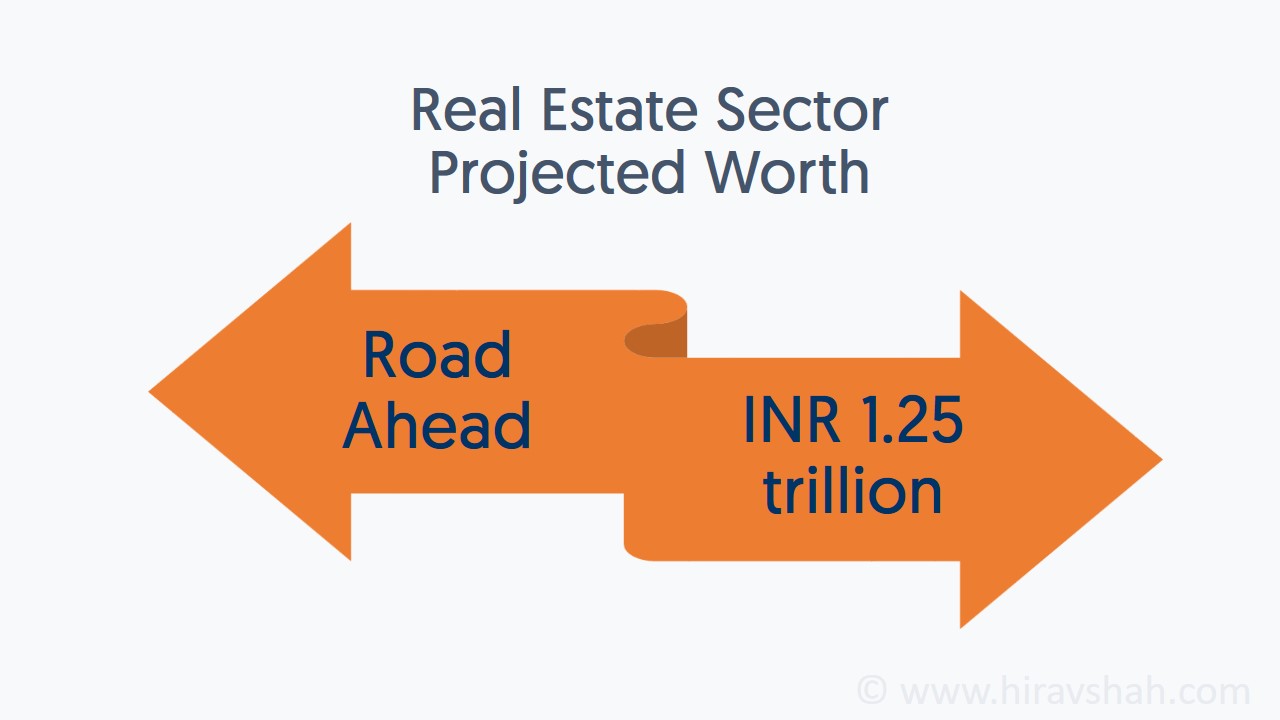 With the approval for Real Estate Investment Trust (REIT) by Securities and Exchange Board of India (SEBI), the opportunity of all kinds of investments in the Real Estate sector is set to be worth Rs.1.25 trillion over the years. Globalisation, increased FDI and consumer awareness have boosted challenge acceptance, man power, multi city projects and high quality technology and innovation in the sector.

The discussion on challenges in the Real Estate sector makes it easy to define the solutions further on. The most prominent issues faced by the developers and investors are:
Stagnancy in the Market,
Declining Sales,
Delayed Projects,
Lack of Funds,
Political uncertainty,
Compliance with changing Government norms,
Faith and confidence on Real Estate Developers.

With unsold inventory of more than 10 lakh units in the top 7 cities, developers are struggling with uncertainty. So the BIG question in this market and economy is how will a real estate developer make his mark in the property sector? 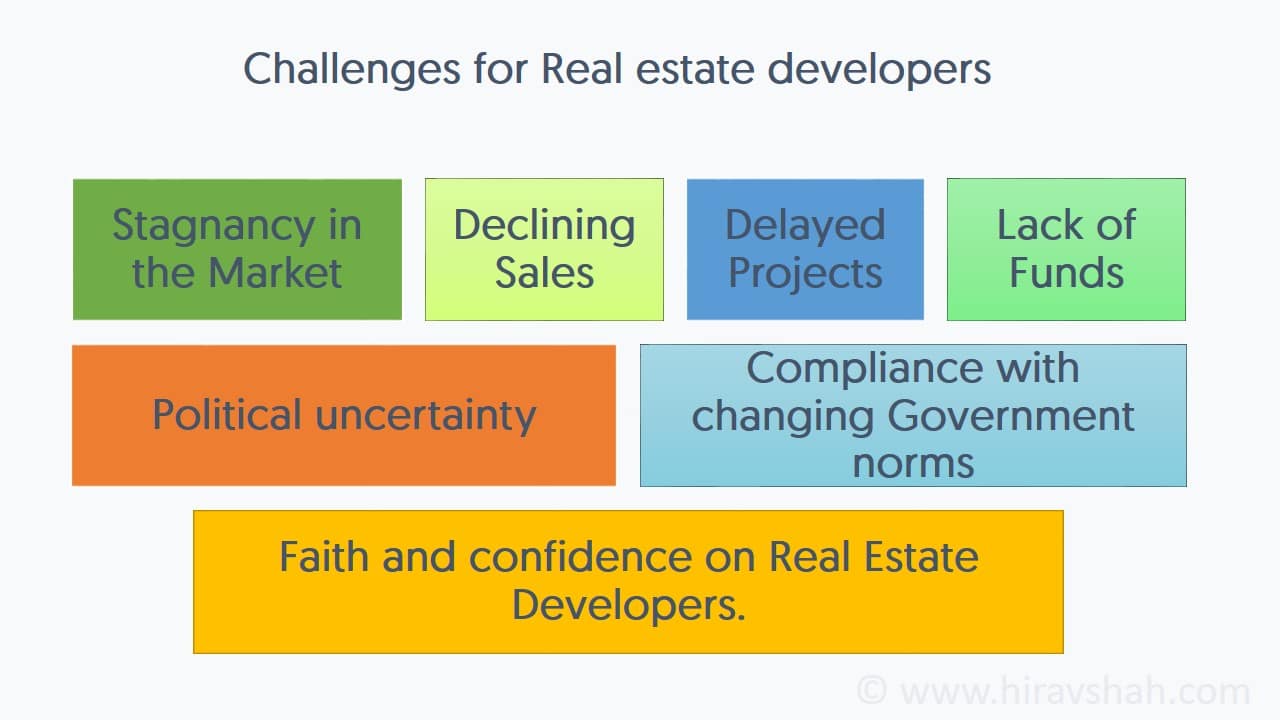 First know that you can come out of these challenges!

Everybody has got an excuse as to why they are not successful in business or in life. But there’s only one reason why!

And that is because we cannot come up with all the resources we need such as the time, the energy, the money, the capital and the systems. But the most successful people find the resources because they’re resourceful. They figure out what’s needed, and they have enough positive emotion to find the answers.

Thus, If you’re creative enough, you’ll find the answer. If you’re determined enough, you’ll get through the problem. If you care enough for other people, you can get them to care about you and your mission!

Great ideas don’t interrupt you, they’ve got to be pursued. And ofcourse you know that, or you wouldn’t be a part of this journey. You came for this because you are one of those people looking for answers.

Hirav Shah recalls one of the most interesting cases in his Astro career. One of the quickest and fastest land developing and real estate companies had around 10-15 projects running in every prime area of top cities of India. The Developer was on cloud 9. Suddenly one day he realised that he was not able to fulfill any of his financial commitments to the buyers, investors, banks and even partners. Everyone started asking questions as he had made many wrong decisions with wrong people at the wrong time. He was on the brink of suicide. Nobody was putting their trust in him or his company. He met many Astrologers, Numerologists, and Astro-Numerologists but nothing worked for him. His sade-sati was running and he started feeling that planets were not giving him the right support.

One of his common friends introduced him to Hirav Shah. The first thing Hirav saw was the developer & his organization’s potential capacity. Whether the chances of getting achievement were still there. What were his chances of making it big again? What were his chances of attempting suicide again ? Hirav discovered very interesting facts. He found that the developer and his organization can roll out enormous improvements and make a huge impact on others’ lives. Hirav Shah helped him to make this a reality, turn things around, succeed in his endeavours and achieve the desired goals. Today the developer and his company are growing at an enormous pace and are delighted to have the planets in their favour!

If you know you have potential inside you to leave a legacy behind, but you’re just not fully reaching it, then first know you’re not alone…

And secondly, what unlocks our full potential is learning from those who have already transcended, broke the barriers, didn’t listen to the naysayers and used resourcefulness to reach the next level in life, wealth and impact…

If you’re not living the life you desire and would like more impact, purpose, or success then you need new capabilities and here is your chance to gain them.

goal For the real estate developers

Hirav Shah’s goal is to help Real estate developers by teaching them what he knows. He feels lucky to be part of an industry where his “job” allows him to see the satisfaction of accomplishment when people follow through with what he advises them to reach there…

You have three choices to make a difference and reach the NEXT LEVEL of success:

1. You can go the traditional education route. Go further in your formal education and hope it does something for you.

2. You can keep trying on your own and spend **who knows** how much time with trial and error, figuring out mostly what doesn’t work before you figure out what does…

3. OR you could shorten the learning curve through self-education by accessing Hirav Shah’s 15+ years of knowledge, achievements and failures and learning what he has found to be the most effective way to expedite your success.

How to increase certainty in the Real estate business?

Looking at the most successful people in the world, people ask Hirav Shah, what do they have in common? Well the first thing they have in common is that they have this momentum that they’ve developed, right? They’re in a situation where they’ve learned to increase their certainty.
How do you increase your certainty? By getting the results in advance and by enough repetition till you feel certain.

Astrology is the only tool where you get to know things in advance before making any strategies or taking any massive action. When you gain certainty, you are able to execute.

Just imagine if you get to know the general timeline in advance for when your properties will be sold out?! Wouldn’t it be amazingly helpful for you? You can adjust your mindset easily and accordingly you can make strategies and take actions. Astrology is a superb tool. Isn’t it? You can utilise this tool to increase certainty of many things.
That’s what the job of an Astro-Strategist for Real-Estate Developers is!
By getting the results in advance, 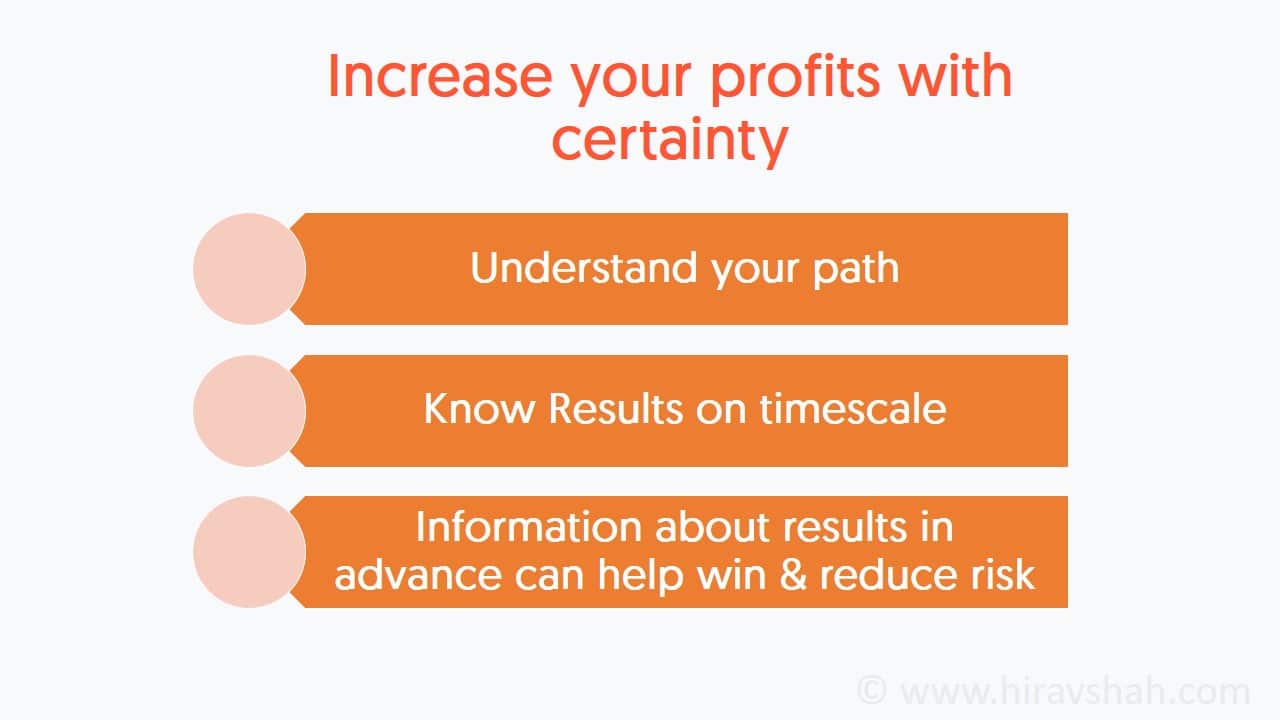 Areas in which Real Estate developers can get Astro-analysis

Hirav Shah is an Astro-strategist and Business Astrologer and one of the top influencers in the circle of corporates, Hollywood, Bollywood, sports and politics. He advises free of cost to professionals who are battling in their work life. He believes luck is a factor that cannot be ignored in the equation of success and its inclusion with business principles, makes SUCCESS attainable.

Hirav Shah’s mission is simple:
● Why earn less when you have the potential to earn more?
● If you are a businessman, your account should have money equivalent to your potential. 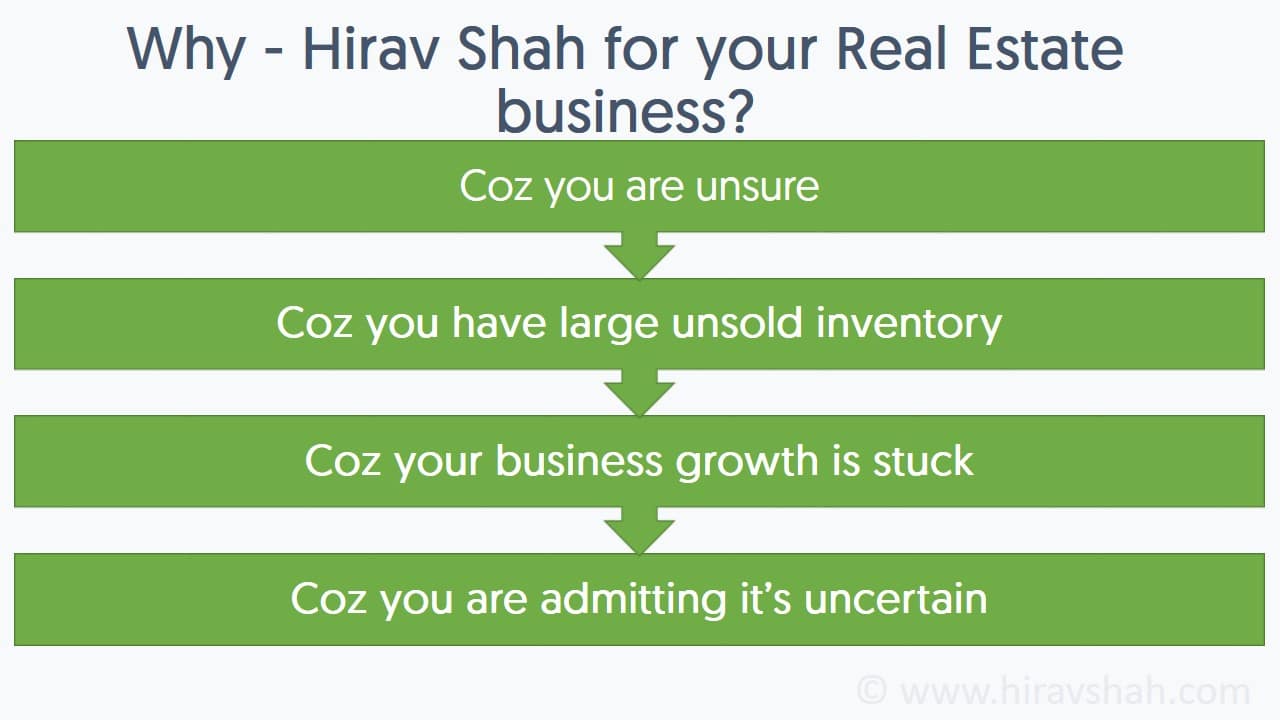 Why - Hirav Shah for your Real Estate business?

After completing his graduation in Electronics Engineering, Hirav Shah started his own IT Company and pursued post-graduation in Business Management. He also started helping his father in his construction business. But in 1998, his father had to undergo heart surgery and so, Hirav took up the entire handling of the project to complete it effectively in the set timeline.

Hirav Shah did not just work according to his father’s ways. He also implemented the principles of Astrology and came out of the life-long struggle of being a small-town builder. He was able to achieve greater heights. As a result of this phase of his life, he can understand a Builder’s aspirations and what a financial crisis does to them.

Hirav was also a University & National Chess player and qualified National Volleyball player helping him to analyze things in a sporty way. This and the mix of his construction business experience and implementation of Astrology science can give astounding results.

These days, Hirav Shah is working with India’s leading builders and real estate developers mainly from Mumbai, Delhi, Bangalore, Chennai, Ahmedabad, Calcutta, etc for their existing and new projects to help them out, increase certainty and to make strategies.

Thank you for taking the time. I’m really looking forward to getting to know you and your business. Hopefully I’ll get to meet you personally, hear and understand your story.
Till then, live strong, live with passion!

Advertising Strategies For Your Business.

Astrology To Make Advertising Strategies For Your Business.

Marketing Strategies For Your Business.

Why should you use Astrology as a tool to make Marketing Strategies for Business?

In life, when you have CLARITY on where you want to go and Guidelines on what are the CHANCES of REACHING there, things get less confusing.

Why my profits are low?
What are the causes of under performance?
Get all your questions answered by
RENOWNED ASTRO-STRATEGIST HIRAV SHAH

Why unsold houses stock is piling up?
What are the causes of delay in projects?
What Can you Do When A Project Is Stuck?

Even in Unpredictability, Your Tourism & Hospitality business can still thrive. Know how far is the light at the end of this tunnel and the Certainty of you reaching there.

Education INDUSTRY
Why are the Educators and Investors in the Sector Struggling for survival?
Can Astrology help? 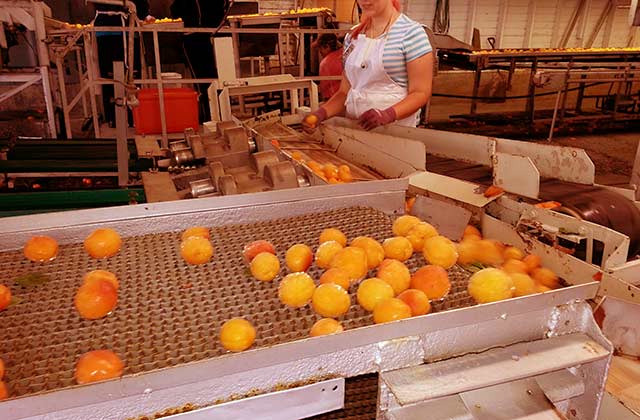 The ingredients to Success in the Food Industry.
With Hirav Shah