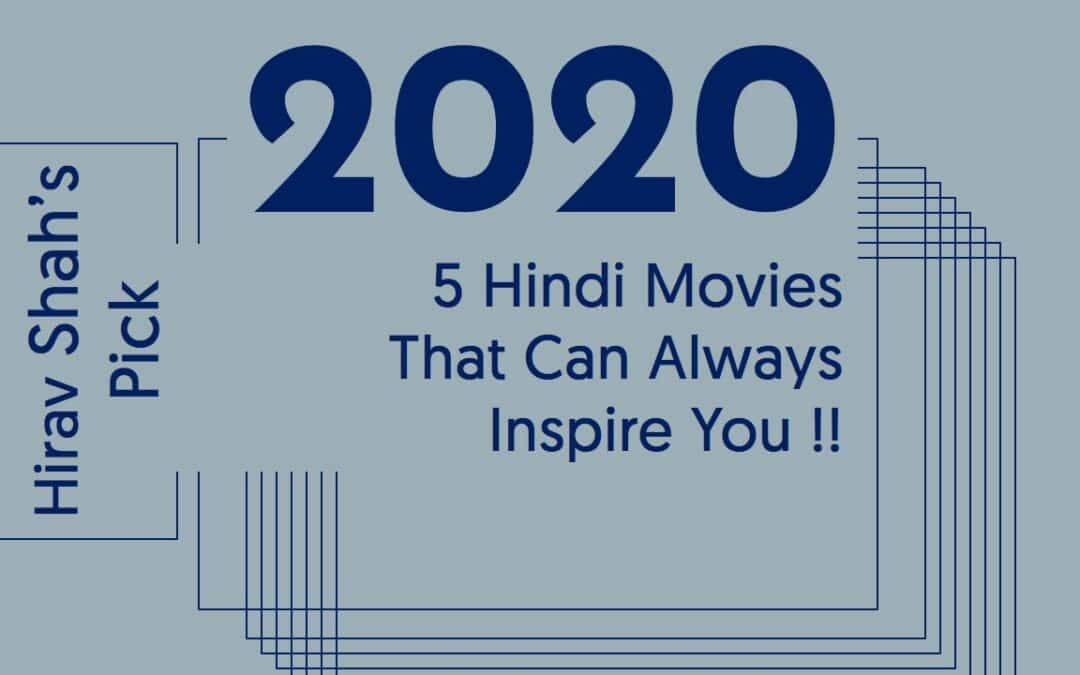 Today, cinema has become one of the most preferred and powerful mediums of communication and entertainment. Movies play a formative role in developing a culture or addressing a contemporary issue. Movies have the capacity to evoke many kinds of emotions in us. They can make us laugh, cry and even inspire us to do better things with our lives. While there are many genres in movies such as action, comedy, horror, drama, thriller etc. But the most memorable ones are from the inspirational genre, Opines Hirav Shah, Movie Industry’s Most Influential Adviser.

Watching a character survive through hardships and emerge triumphant is attractive to everyone. Inspirational movies show emotions like love, perseverance and determination, grit and striving . Looking to shake yourself out of complacency and get a little fired up?

Well, Celebrated Business Astrologer™ Hirav Shah lists down some Hindi Movies that can inspire you to fire up your future !

Dashrath Manjhi (Nawazuddin Siddiqui) is a poor man from a low caste, living in a remote village cut off from the world by a rocky mountain range. He loves his wife, Phaguniya (Radhika Apte), more than anything in the world. Unfortunately one day, while climbing the mountain to get food, his wife slips and dies. Overwhelmed by grief, Dashrath decides to carve out a path through the mountain, so that no one else would suffer his fate. So he sets out on a mission, which goes on for 22 years, all by himself, with just a hammer and a chisel, he breaks through the rocks, till a path is carved out from the mountain. Nawazuddin Siddiqui played this role that vacillated between grief and grit with rare talent. So real was his performance that you not only sympathised with his loss but also were inspired by the lesson.

Self-Belief can truly move/break mountains. Believe it can be done. When you believe something can be done, really believe, your mind will find the ways to do it. Believing a solution paves the way to a solution.

This was the real-life story of the Flying Sikh – world champion runner and Olympian Milkha Singh, who overcame the massacre of his family, the Partition and subsequent homelessness to become one of India’s most iconic athletes. He infamously lost the biggest race of his life at the 1960 Rome Olympics. But through the darkness he finds the light of redemption.

Milkha Singh was not only portrayed as a man of steel in the movie but it also showed his fears, vulnerabilities, desires and downfall. Farhan Akhtar was an interesting choice to portray the sports star. Farhan underwent a complete transformation – both physical and mental – to look convincing as an athlete. The film was inspirational because it spoke of dignity, dedication and discipline, which brought Milkha Singh eventual triumph. It was also stirring in the way Farhan remoulded himself to attain the near impossible task of playing a real-life athlete.

In life, when you have CLARITY on where you want to go and GUIDELINES on what are the CHANCES of REACHING there, You can become UNSTOPPABLE.

Yash Raj Films’ Chak De! India was apparently based on the life of an Indian hockey player Mir Ranjan Negi. He was the goalkeeper during the Asian Games 1982, when India faced a defeat with the score of 1-7 against Pakistan. This was a humiliating experience for Negi where he faced allegations of letting his country down deliberately. Later in his life, Negi coached the National Women’s hockey team and the team went on to win Gold at the Manchester Commonwealth games. Shah Rukh Khan, as Kabir Khan, reportedly portrayed Negi’s character in the film. A college level hockey player himself, it didn’t take SRK long to pick up the game. The film starred SRK with Vidya Malvade along with a group of debutante girls as hockey players. The film spoke of patriotism, integrity and rising above humiliation to attain redemption.

The decisions you take today will decide your future and your ego should not be bigger than your goals.

3 Idiots taught us that whatever your problem in life is… just say, “Aal izz well’…this may not solve your problems but it will give the courage to face it..” The second is, “Chase excellence and success will follow”. The third, “Life is not about getting marks, grades but chasing your dreams.” These are some golden rules, which 3 Idiots taught you in an entertaining way. Said to be loosely based on the novel written by Chetan Bhagat titled Five Point Someone, the film assumed a cult following amidst youth. In the movie, Farhan Qureshi (R Madhavan) and Raju Rastogi (Sharman Joshi) play engineering students forced into the rat race of reaching the top, even while dealing with their own personal problems. But Rancho aka Chanchad (Aamir Khan) changes their attitude towards life. He helps Farhan to gather courage to confront his father and explain his desire to pursue a career as a wildlife photographer instead of an engineer. He also helps Raju Rastogi defy his fears and gain confidence to face them head on. 3 idiots brought to light the education system in India, which puts unnecessary pressure on the students. 3 idiots taught us that there’s much more to life than just marks on your report card.

The ones who are crazy enough to think they can change the world, are the ones that do.

Karan (Hrithik Roshan) is a lazy good-for-nothing youth, who lives off his family business. Karan’s life includes hanging out with friends and spending time with Romi (Preity Zinta), his ladylove. When he watches an action movie, he decides to enlist in the army. Even basic army training proves a lot to handle for Karan and he decides to quit. This results in Romi and his family losing respect for him. Karan re-joins the army to validate his identity and self-worth.

The film inspired you to have goals and work towards them. It reminded you that for life to be beautiful, it must have meaning.

Dare to dream and work towards it.

You can also fire up your future !!
With the right guidance, you can aim for the moon and shine with the stars.

Country’s Most Influential Business Astrologer™ Hirav Shah’s answers have proven to be game-changers for many.

Home » Predictions » Entertainment » 5 Hindi Movies That Can Always Inspire You !!

FORGIVENESS IS THE F WORD EVERYONE NEEDS TO EMBRACE