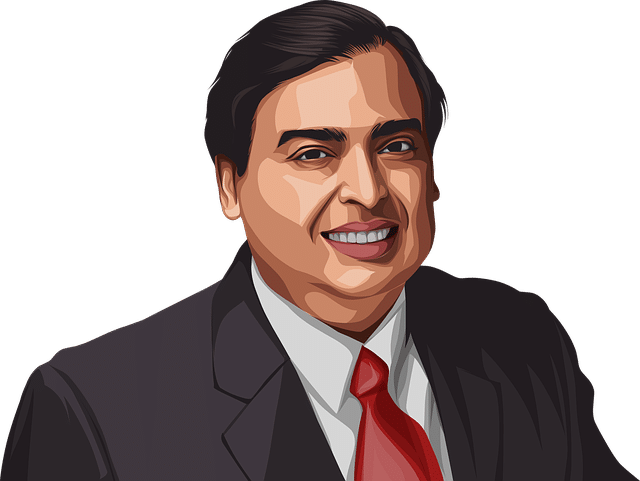 The story of 21st-century wealth is the story of Reliance. And steering it all is a humble person of an unassuming disposition – The Mukesh Ambani.

Mukesh Dhirubhai Ambani, is an Indian billionaire businessman, and the chairman, managing director, and largest shareholder of Reliance Industries Ltd. (RIL), a Fortune Global 500 company and India’s most valuable company by market value. He is the richest person in Asia with a net worth of US$ 83.1 billion and the 10th richest in the world.

Mukesh Ambani Net Worth in Rupees

With a net worth of Rs 7,18,000 crore, Mukesh Ambani has retained the title of being the richest Indian for the 10th consecutive year, a report released by IIFL Wealth and Hurun India has said.

Ambani lived only briefly in Yemen, because his father decided to move back to India in 1958 to start a trading business that focused on spices and textiles. The latter was originally named “Vimal” but later changed to “Only Vimal.” His family lived in a modest two-bedroom apartment in Bhuleshwar, Mumbai until the 1970s. The family’s financial status slightly improved when they moved to India but Ambani still lived in a communal society, used public transportation, and never received an allowance.

But today, he is among the richest men on the planet, the richest man in Asia and India. Mukesh Ambani took the helm of Reliance Industries Limited and Indian petrochemicals Corporation during the split of his father’s business empire. Rapid growth and expansion of the Reliance Industries turned into a phenomenal success. The next success is even massive. Launch of 4G broadband services and the Jio network elevated his success to an unimaginable extent. Refining, oil and gas industries, IPL business, telecommunication, and whatnot ? The meteoritic rise of Mukesh Ambani served him with all accolades and honorary awards.

In 1981 he started to help his father Dhirubhai Ambani run their family business, Reliance Industries Limited. By this time, it had already expanded so that it also dealt in refining and petrochemicals. The business also included products and services in retail and telecommunications industries. Reliance Retail Ltd., another subsidiary, is also the largest retailer in India. Reliance’s Jio has earned a top-five spot in the country’s telecommunication services since its public launch on 5 September 2016.

Through Reliance, he also owns the Indian Premier League franchise Mumbai Indians and is the founder of Indian Super League, a football league in India. In 2012, Forbes named him one of the richest sports owners in the world. He resides at the Antilia Building, one of the world’s most expensive private residences with its value reaching $1 billion.

“In a tumultuous year for the global economy, India’s richest preserved their wealth. Mukesh Ambani remains the wealthiest Indian for the 13th year in a row, adding $37.3 billion to his net worth,” – Says Hirav Shah.

Whatever Mukesh Ambani touches, turns into Gold. Well, There are many different planetary combination including the 6th house in his horoscope, position of Sun and Venus and many other strategical decisions he took on time, which makes him a lucky and a legend and a business magnet in the Indian Industry.

The 2nd, 6th, and 10th houses are grouped as the Earth Houses and together referred to as THE TRINITY OF WEALTH. These houses (2, 6 and 10) are mainly responsible for the extent of material success in one’s horoscope.

2nd house influences accumulation of money (bank balance) and other immovable assets such as properties, houses, jewelry and various other acquisitions. 10th house rules profession and indicates the extent of success in terms of professional/business accomplishments, name and fame etc.

In Kaliyug, one person’s loss is another’s gain. If Coke loses customers it is to Pepsi’s gain. Now on the corporate battleground with no visible bloodshed, the winner takes it all- whether it is a larger market share or lucrative national/global infrastructure contracts. The blessings from 6th house become obvious and mandatory in this regard. A global corporation, or one aspiring to be, will have global competitors; there would be a lot of bad blood, many hurdles; litigation needs to be addressed. One needs to be in the good books of those in power; strings need to be pulled, and ‘friends’ in high-places cultivated.

One has to navigate through much opposition and obstacles to finally be victorious. It isn’t surprising that the 6th house also indicates strenuous labor and hard work. CEOs of multinationals work 19 hours a day on an average, and upon their demise are often called a KarmaYogi. Well, money can acquire any kind of title.

Therefore an exceptionally strong 6th house lends the exceptional support for one to forge ahead and vanquish the competition to eventually manifest the assets and gains indicated by the 2nd and 11th houses. Such behind-the-scenes battles are being played out frequently in corporate battlegrounds; a few become very visible such as between Mukesh Ambani and his billionaire younger brother Anil Ambani.

Thus the 6th house has to play a significant role when we talk about exceptional material gains.

Stellar astrology rule: When the majority of the planets are connected with the Trinity of Wealth houses i.e. 2, 6 and 10 in one’s horoscope, he/she is bound to be very successful in life.

With luck, timing and major favorable planetary transition of Jupiter, Saturn and Rahu on his side to vision, clarity and a very good team on his side – Ambani doesn’t want to retire, before he’s succeeded in turning Reliance into one of the world’s most valuable companies.

In a nutshell, Ambani will be able to create “not just a telecom player, but a serious tech player with a global footprint in a few years.”- Predicts Business Astrologer™ Hirav Shah.

What is the Net Worth of Mukesh Ambani in Rupees?

How much does Mukesh Ambani Earn Per Day?

In a single day, Mukesh Ambani & family created a wealth of around ₹164 crore

How Much Does Mukesh Ambani Earn Per Hour?

According to the Media report, Ambani earned Rs 90 crore per hour during the coronavirus pandemic.

Who is richer, Ambani or Adani?

Gautam Adani is the richer than Ambani. Adani who now ranks among the top 10 wealthiest persons of the world, has a net-worth of $88.6 billion, about $610 million higher than Mukesh Ambani’s net worth.

Which car does Mukesh Ambani use?

Reliance Industries (RIL), headed by India’s second richest man Mukesh Ambani, has bought a luxury Rolls Royce hatchback costing around ₹13.2 crore.  It is one of the most expensive car purchases ever in the country.

How did Ambani get so rich?

Dhirubhai Ambani began a business trading in spices in the late 1950s. He soon expanded into other commodities, with higher-quality products and accepting smaller profits than his competitors. When Dhirubhai Ambani died, Mukesh Ambani’s feud with his brothers split the company between them. He grew the petrochemical, gas, and oil business into a global enterprise to become a rupee trillionaire.

Who is the No. 1 richest person in the world?

Elon Musk, the co-founder of Tesla, is the richest person in the world with a net worth of $222 billion as of Feb. 28, 2022. Behind Musk is the founder of Amazon, Jeff Bezos, with an estimated net worth of $178 billion.

Who is the richest man in India?

Who is the 2nd richest person in India?

Mukesh Ambani is the second richest person in India after Gautam Adani.

The Czar Of Indian IT Industry, Azim Premji Life & Lessons

Weekly Horoscope From May 2 to May 8, 2022 for ENTREPRENEURS by Business Astrologer™ Hirav Shah.

Weekly Horoscope From May 9 to May 15, 2022 for ENTREPRENEURS by Business Astrologer™ Hirav Shah.

How A Small Time Businessman Can Become A Big Shark !