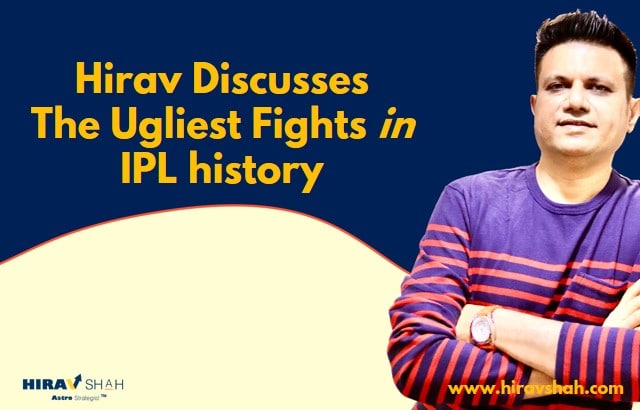 In a recent IPL match, Harshal Patel of Royal Challengers Bangalore (RCB) spat with Rajasthan Royals Riyan Parag. The incident happened after Parag scored 18 runs off Patel’s over. Parag hit two huge sixes and a boundary in the last over of the innings to take his team to 144/8.

But, after the over, the two got into a cat fight while they were leaving the ground. Parag had some verbal exchanges with Mohammad Siraj, and later on, Patel too stepped in. Finally, players from both teams pacified the two.

Even after the match got over and RCB lost to Rajasthan, Harshal refused to shake hands with Parag.

If we look at the IPL’s history, there have been several instances where players have had confrontations during the matches. Now, we bring you five such incidents.

This was the worst fight in IPL ever. Pollard shows his boots to Starc, and Starc shows his middle finger to the Caribbean. It was the 17th over of the match when Starc bowled a bouncer to Pollard, which the West Indies batter couldn’t play. Starc then walked up to him and said something, which led to Pollard making a gesture with his hand. Later, Starc was about to release the ball on the next delivery when Pollard decided not to face the ball. Instead, Starc threw the ball at the batter, which angered Pollard. The West Indian charged his bat as if he was going to throw it on Starc. However, the bat slipped from his hand and landed on the pitch.

For the next ball, Starc runs out Pollard with the West Indian batter not even running to the other side instead of showing his boots. After the match, both the players were penalized for their behavior. Starc was fined 50% of his match fee, while Pollard was fined 75%.back then by the IPL management.

Two hot-headed players went up against each other. In the 17th over of the game, when Kohli was dismissed by Laksmipathy Balaji, he got into a heated exchange with KKR captain Gautam Gambhir. Kohli and Gambhir were seen angrily walking against each other, only to be then separated by other players, including umpires. The two patched up after the match and didn’t speak about it to the media.

During the first season of the IPL in 2008, Mumbai Indians had lost a match against Kings XI Punjab. Soon after the game, Harbhajan Singh slapped S Sreesanth. There are different theories as to what exactly happened between them. After the incident, a video of Sreesanth crying went viral on social media. However, Harbhajan later apologized to Sreesanth.

We rarely see Mahendra Singh Dhoni loses his cool. One such incident happened in 2019; during a match against Rajasthan Royals, Captain Cool lost it and entered the ground to confront the umpires.

When the match was about to end, CSK needed 8 runs off 3 balls. Ben Stokes bowled a high-pitched full toss to a CSK player, which the main umpire called No Ball, but the third umpire didn’t signal anything. Confusion erupted, and eventually, the delivery was given a green signal by both the umpires. This enraged Dhoni, who entered the field to have a word with the umpires. However, CSK won the match.

The fifth season of IPL saw a fight between Kieron Pollard and Dwayne Bravo. It was the eliminator match between Chennai Super Kings (CSK) and Mumbai Indians (MI). CSK had posted a total of 187 runs. Mumbai’s batting collapsed while chasing the target. They were down to 129/7 and needed 59 runs off 13 balls. Pollard was batting, and Bravo bowled a bouncer. This is the time Pollard mistimed it, and the ball landed in the hands of Suresh Raina.

Bravo teased Pollard by showing him a send-off gesture. Pollard looked angry and didn’t say anything but just walked out of the ground.

Hirav Shah concludes by saying, “So these were some of the ugliest and worst fights in IPL history. These were some of the moments that were too controversial. They say Cricket is a gentleman’s game. It’s said so because the cricketers usually play in the right spirit of sports. The tradition has continued from the past but has also evolved over the years. Cricket is a gentleman’s game even today. But some incidents like those mentioned above prove something else.”

Chennai Super Kings fell short by 13 runs in the 49th clash Vs. Royal Challengers Bangalore on Wednesday at Pune and are now officially out of IPL 2022.

How many points does a team need to qualify for the semis in IPL?

Teams with 16 or more points have a better chance of qualifying. However, if two teams win the same number of points, the net run rate is checked. The team with a higher net run rate will go ahead in the premier league.

Famous Sports Celebrities Birthdays IN MAY 2022