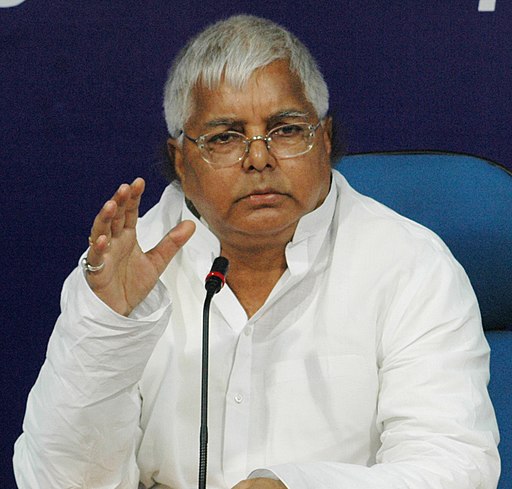 Lalu Prasad Yadav (born 11 June 1948) is an Indian politician and has been one of the key leaders in the political history of India. He is the president of the political party Rashtriya Janata Dal (RJD), a former Chief Minister of Bihar, a former Union Minister of Railways, and a former Member of Parliament of the 15th Lok Sabha.

He entered politics at Patna University as a student leader and in 1977 at the age of 29, was elected as the youngest member of the Lok Sabha for the Janata Party. He became the Chief Minister of Bihar in 1990. His party came to power in the 2015 Bihar Legislative Assembly election in partnership with Nitish Kumar of JD(U). This coalition ended when Nitish resigned and RJD was ousted, becoming the opposition party. In the 2020 Bihar Legislative Assembly election, RJD remained the single largest party in Bihar and currently serves as the state’s main opposition party. Yadav was convicted in the controversial Fodder Scam and was serving a term until 17th April 2021, when he was granted bail from the High Court in the corruption scandal.

” Lalu Yadav, who is currently undergoing medical treatment at Delhi’s AIIMS was granted bail on health grounds. In 2021, Laluji would want to enjoy the show by staying behind and tacitly endorsing Tejashwi Yadav’s vision. But his political- intelligence cannot remain idle in the present context of Bihar politics. The former Chief Minister is a great political mathematician, adroit in politics, what local analysts call, ‘Jor-Ghatao’ (addition and subtraction). He has acquired mastery in politics over how a subject can be converted into an issue of people. Lalu Prasad is still considered as a leader of mass, his words and statements in politics are taken seriously by large sections of people and his political manoeuvring is well known to all his opponents giving sleepless nights to Nitish Kumar’s BJP government,” says celebrated Politics astrologer Hirav Shah.

"Will Jaideep Ahlawat Emerge as the Biggest Superstar of OTT Platforms?"