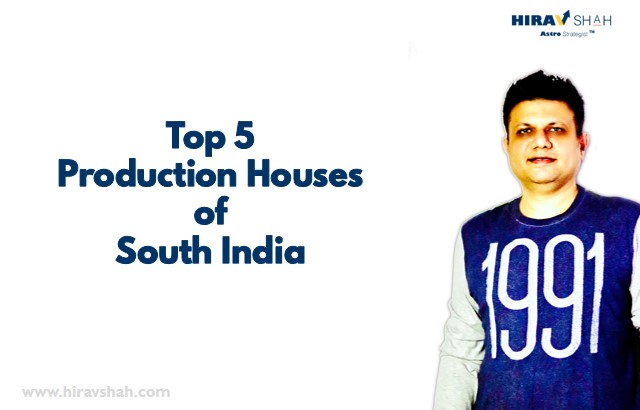 The Film & Entertainment industry in South India is a multi-crore enterprise. Despite this huge opportunity to make money, studies have shown that only 0.05% of the talent pool are able to achieve their full financial potential.

Below is the list of the Top 5 Production houses in South India.

Lyca Productions is an Indian entertainment company, which was established by Subaskaran Allirajah in 2014. A subgroup of Lycamobile, the production studio has been involved in the production and distribution of Tamil films made in India.

Yaman, Diya, Darbar and Vada Chennai are some of the films which could have done well, though these are not really failures. Their first film, Kaththi, had met with massive protests during release, otherwise it could have fared even better.

They have a huge Tamil-Hindi filmography for 2021-22. The upcoming films are Panni Kutty, Raangi, Don, Good Luck Jerry, Ponniyin Selvan and Ram Setu. Looking at the slate, we can say that Lyca has a really long way to go and produce many such massive projects.

Arka Media Works is an Indian film production and trans-media company based out of Hyderabad, known for their works in Television and Telugu cinema. Founded in 2001 by Shobu Yarlagadda, and Prasad Devineni.

Arka Mediaworks has produced several successful television shows across languages and channels. They are involved in creating content in Kannada, Telugu, Hindi, Bengali, Marathi and Oriya. With production centres in Mumbai, Hyderabad, Bengaluru and Bhubaneshwar, they are among the largest television content producers in India.

Since inception in 2001, they have prospered significantly by remaining fiercely loyal to their core objective – to constantly and consistently push the boundaries of commercial cinema.

Meanwhile, they are also the proud producers of the country’s best cinematic brilliant epics Baahubali: The Beginning & Baahubali 2: The Conclusion.

Films like Vedam, Panjaa, Maryada Ramanna etc were not box office duds. But these films could have done much better, if they had a better release timing.

With online giants like Amazon Prime, Netflix etc they are interested to bankroll some web series which costs a huge sum. Not stopping there, Arka Media Works would like to bankroll international projects for the same online platforms in the upcoming months.

After Enthiran which was a bumper hit, Sarkar and Petta were not as big Hits. But they were very good films. All film studios in India have their share of hits and flops even Sun pictures.

Annaatthe, Suriya 40 and Thalapathy 65 are the upcoming films of Sun Pictures. Looks like they are all set to hugely entertain the South Indian audiences with their amazing stories.

V. Ravichandran, is an Indian film producer and distributor in Chennai, India. He is the founder and owner of the production and distribution company, Aascar Films Pvt. Ltd.

Ravichandran started his venture in 1998 with the co-production of Kadhalukku Mariyadhai. He went on to produce many large-scale Tamil language films and distribute a number of English films across South India.

Aascar Films is known for the variety it provides, from small budget movies to the big budget ones, such as “Dasavatharam”. The company believes in taking up challenging projects and has excelled at them, as it has at churning out big hits with popular film stars.

In 2012, Ravichandran and director Shankar began work on the romantic thriller film, I (2015), featuring Vikram in the lead role. En route to becoming one of the most expensive Tamil films of all time, I took three years to complete, with over ten thousand people involved in the making of the film. The team also subsequently held a grand audio launch event with Arnold Schwarzenegger being brought in as chief guest for the event, and I released shortly after, becoming a super profitable venture.

Vishwaroopam II and Bhooloham were declared as box office failures.

Actually these are not disasters but they failed to make as much money at the box office as they cost to produce and release.

They have not declared anything yet to be released but knowing their business minds and vision, they can easily come back with a bang with a few projects for digital and for release.

DVV Entertainments was founded by D. V. V. Danayya in 1993, who is a prolific Indian film producer working in Telugu cinema.

Most of the studio’s films are also critically acclaimed which signifies the fact that quality is something the studio has been consistently maintaining.

Varudu, Julayi, Cameraman Ganga Tho Rambabu, Ninnu Kori and Vinaya Vidheya Rama were all good stories with big stars but somehow these could not be translated properly on screen leading to an average response at the boxoffice.

The future is already brighter than ever for the production house. Digital rights of their upcoming film RRR has been sold for a whopping Rs 325 crore.

With this exorbitant deal, RRR has now become the first movie to fetch such a huge amount of money ahead of its release.

Even during the pandemic, when many businesses remained closed, the entertainment business continued to stay up and running. The major production houses of South India (the ones mentioned above ) took the opportunity to engage and entertain billions of Indians through runs and re-reruns of their content on television, Tells Hirav Shah.

Cinema, Movies & Magic have always been closely associated. If entertaining people during today’s trying times is not “magic”, then what is !!

Hirav Shah is the man whose advice and consultation have shaken up the movie culture in 2021.

Hirav’s Astro-Strategy has shown to the world that light was indeed there, at the end of the tunnel.

Meanwhile, Hirav has helped “turn around” the businesses of numerous film studios in India and abroad. And, that is the reason Hirav Shah has become film industry’s favourite Astro-Strategist.

Which is the biggest film industry in South India?

By 2021, Telugu cinema had emerged as the  largest film industry in terms of box-office of South India.

Which is the biggest production house in Tamil Nadu?

Who is the best film producer in south India?

Who is the No 1 director in South India?

Who is the best director in South India?

Ajith Kumar horoscope analysis : "Will Ajith Recover From The Failure of Valimai in 2022?"

Weekly Numerology Predictions for ENTREPRENEURS for the week (May 6 to May 12, 2022)

5 South 'Beast' Superstars Who Turned Out To Be Chartbuster Singers