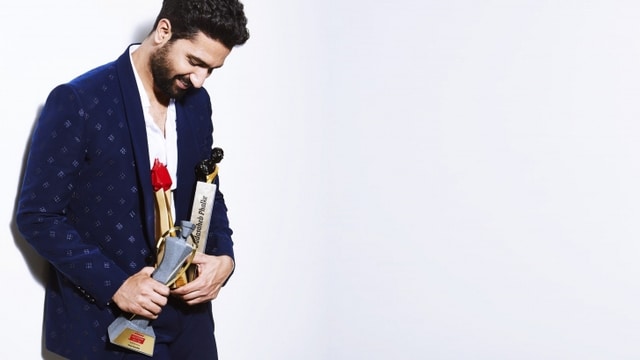 Vicky Kaushal, born 16 May 1988, is one of the most promising Indian actors to emerge a star in recent years who works in Hindi films. He is the recipient of the National Film Award for best actor and a Filmfare Award and has appeared in Forbes India’s Celebrity 100 list of 2019.

Born to the action director Sham Kaushal, Kaushal pursued an engineering degree from the Rajiv Gandhi Institute of Technology. Aspiring to take up a career in film, he assisted Anurag Kashyap in the crime drama Gangs of Wasseypur (2012) and went on to play minor roles in two of Kashyap’s productions. His first leading role was in the independent drama Masaan (2015), which earned him the IIFA and Screen Awards for Best Male Debut, following which he starred as an unhinged cop in Kashyap’s psychological thriller Raman Raghav 2.0 (2016).

Kaushal rose to prominence in 2018 with supporting roles in Raazi and Sanju, two of the highest-grossing Hindi films of the year. For the latter, he won the Filmfare Award for Best Supporting Actor. His 2018 projects also included starring roles in the Netflix films Love Per Square Foot and Lust Stories. The following year, he played the lead role of a military officer in the commercially successful action film Uri: The Surgical Strike, winning the National Film Award for Best Actor.

Future of Vicky Kaushal in 2021

Vicky is entering 34th year of life and that adds to 7 and as you know that 2, 1, 7 are the favourable numbers for birth number 7 so 2021 second half is going to be a very favorable period for Vicky Kaushal predicts Hirav Shah.

“Vicky Kaushal’s upcoming films like Sardar Udham Singh, The Great Indian Family will earn him good accolades from the audience and critics. Udham Singh movie will also make him win some awards. But he needs another solid commercial film to barge into the superstardom which the likes of Ranveer Singh or Varun Dhawan enjoy, says noted Bollywood astrologer Hirav Shah.

Varun Dhawan Horoscope Analysis : "Will Varun Dhawan Wipe Out All Kalanks and Create Bawaal at the Box Office in 2022?"