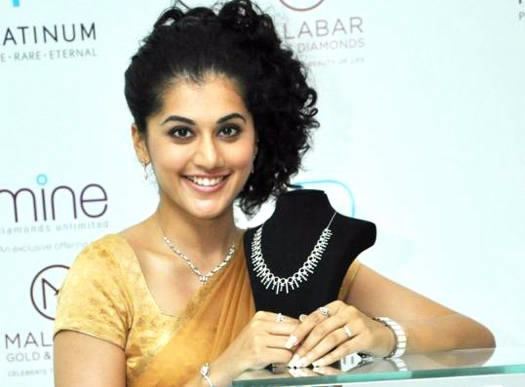 Taapsee Pannu (born 1 August 1987) is one of the most happening actresses in Indian Cinema right now who works primarily in Hindi, Telugu, and Tamil-language films. She is the recipient of two Filmfare Awards and has been featured in Forbes India’s Celebrity 100 list since 2018.

After modeling for a few years, Pannu made her acting debut with the 2010 Telugu film Jhummandi Naadam and later acted in the 2011 Tamil film, Aadukalam. She made her Hindi film debut with David Dhawan’s comedy Chashme Baddoor. After appearing in several South Indian films, Pannu got noticed for her performance in the courtroom drama Pink, which was a critical and commercial success.

It was followed by the war drama The Ghazi Attack (2017), the action thriller Naam Shabana (2017), drama Mulk (2018), Anurag Kashyap’s romantic drama Manmarziyaan (2018), Sujoy Ghosh’s mystery thriller Badla (2019), and the space drama Mission Mangal (2019). For portraying the septuagenarian sharpshooter Prakashi Tomar in the biopic Saand Ki Aankh (2019), she won the Filmfare Critics Award for Best Actress. In 2020, Pannu received widespread praise for her role in Anubhav Sinha’s Thappad, and the performance gave her her first Filmfare Award for Best Actress.

Apart from acting, Pannu runs an event management company called The Wedding Factory along with her sister Shagun and a friend. She is also the owner of the badminton franchise Pune 7 Aces, which plays in the Premier Badminton League. She is also vocal about several social and political issues.

Future of Taapsee Pannu in 2021

“Taapsee Pannu is one of the most happening and talked-about actresses in the country right now. She has chosen some path-breaking films like Mulk, Thappad, and Manmarziyaan in recent times which have achieved cult status. Even though she has been involved in some controversies, her popularity has been only on the rise. According to the planetary positions in her horoscope, her upcoming films like Rashmi Rocket, Loop Lapeta, Mishan Impossible, and Blurr will only cement her position in the industry as one of the most remarkable actresses in the current generation. The coming years will see great success for the talented actress. Comparisons with Kangana Ranaut will only add fuel to her stardom,” says celebrated Bollywood Astrologer cum Astro Strategist™ Hirav Shah.

Birthday Predictions: "Will Sai Dharam Tej Bounce Back Strongly in 2021--22 After The Recent Near-Fatal Accident?"