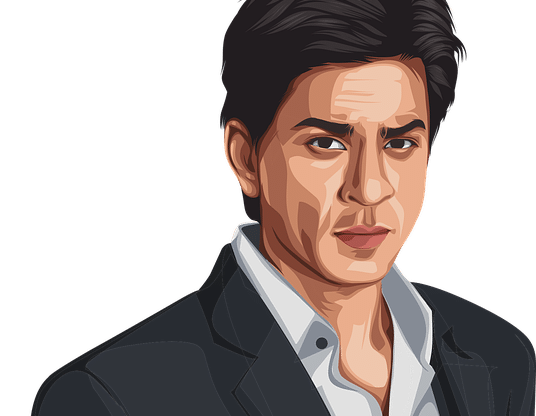 Shah Rukh Khan, born 2 November 1965, also known as King Khan is one of the greatest actors to have ever graced the world of cinema. He is referred to in the media as the “Baadshah of Bollywood” (in reference to his 1999 film Baadshah), “King of Bollywood” and “King Khan”, he has appeared in more than 80 films and earned numerous accolades, including 14 Filmfare Awards. The Government of India has awarded him the Padma Shri, and the Government of France has awarded him the Ordre des Arts et des Lettres and the Legion of Honour. Khan has a significant following in Asia and the Indian diaspora worldwide. In terms of audience size and income, he has been described as one of the most successful film stars in the world.

Khan went on to earn critical acclaim for his portrayal of an alcoholic in Devdas (2002), a NASA scientist in Swades (2004), a hockey coach in Chak De! India (2007) and a man with Asperger syndrome in My Name Is Khan (2010). His highest-grossing films include the comedies Chennai Express (2013), Happy New Year (2014), Dilwale (2015), and the crime film Raees (2017). Many of his films display themes of Indian national identity and connections with diaspora communities, or gender, racial, social, and religious differences and grievances.

As of 2015, Khan is co-chairman of the motion picture production company Red Chillies Entertainment and its subsidiaries and is the co-owner of the Indian Premier League cricket team Kolkata Knight Riders and the Caribbean Premier League team Trinbago Knight Riders. He is a frequent television presenter and stage show performer. The media often label him as “Brand SRK” because of his many endorsement and entrepreneurship ventures. Khan’s philanthropic endeavors have provided health care and disaster relief, and he was honored with UNESCO’s Pyramide con Marni award in 2011 for his support of children’s education and the World Economic Forum’s Crystal Award in 2018 for his leadership in championing women’s and children’s rights in India. He regularly features in listings of the most influential people in Indian culture, and in 2008, Newsweek named him one of their fifty most powerful people in the world.

Shah Rukh Khan has faced many ups and downs in his life. But what happened in the last 30 days was unprecedented. He was attacked like never before when NCB arrested his son Aryan Khan in the drugs cruise case. After 30 days he was finally granted bail as no drugs were found in his possession. The kind of grit, maturity and grace SRK displayed makes us believe why he is one of the greatest.

Lead A Happy Successful Life By Following These Brilliant Quotes

More Awards, More Rewards, a Biopic...and What Not for Mithali Raj in 2022!

Birthday Predictions: Will Jasprit Bumrah Become The World's No. 1 Bowler in 2022?

Mayank Agarwal Horoscope Analysis: Will 2022 Be A Winning Year For Mayank!

Hockey Player Sandeep Singh Horoscope Analysis: Will 2022 Be A Favorable Year For Sandeep!