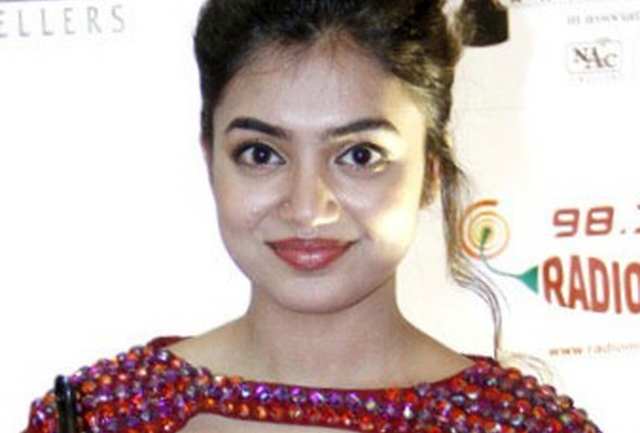 Nazriya Nazim (born 20 December 1994) is an Indian actress and producer who works predominantly in Malayalam and Tamil films.

She started her career as an anchor on the Malayalam television channel Asianet before pursuing a career as an actress. She made her debut as a child artist with Palunku (2006) and then as a lead actress in the 2013 Malayalam film Maad Dad. She has gone on to star in successful films such as Neram (2013), Raja Rani (2013), Ohm Shanthi Oshaana (2014), and Bangalore Days (2014).

Nazriya started her career as an anchor in a Muslim-oriented television quiz show named Punyamaasathiloode in 2005 on Kairali TV, following up with various other anchoring roles.

She then started her acting career in 2006 as a child artist in the Malayalam film Palunku (2006), directed by Blessy, in which she played the daughter of Mammootty’s character. She went on to become an anchor on Asianet’s popular music reality television show Munch Star Singer. The Mohanlal-starrer Oru Naal Varum (2010) was her next venture, in which she played Dhanya, the daughter of Sreenivasan’s character. She was cast in an album titled Yuvvh by Sony Music Entertainment, alongside Nivin Pauly which became very popular among the youth.

Nazriya finally landed in her first female lead role in the Malayalam film Maad Dad (2013). She was associated with the team of Yuvvh—director Alphonse Putharen and actor Nivin Pauly— again for the romantic comedy thriller film Neram—which was simultaneously made in Tamil and Malayalam. The movie became a big success, and the lead pair was appreciated by both critics and audiences alike. The scene in which Nivin proposes to Nazriya acquired cult status among cine-goers. She received Vijay Award in the category of Best Debut Actress for her acting in Neram. She was then seen in Raja Rani, as an IT professional called Keerthana. Her next release was Naiyaandi, in which she played a dentist.

In 2014, she was first seen in Salalah Mobiles, which flopped despite having a strong star cast, including Dulquer Salmaan. She has completed filming for Thirumanam Enum Nikkah in Tamil, in which she acts as a Tamil Iyengar girl. She then did Ohm Shanthi Oshaana in Malayalam, sharing the screen with her lucky charm Nivin Pauly. As expected, the film became a big hit and became a blockbuster.

Her next films were Bangalore Days and Samsaaram Aarogyathinu Haanikaram in Malayalam, Thirumanam Ennum Nikkah and Vaayai Moodi Pesavum in Tamil. She won the best actress in the 45th Kerala State Film Awards.

Nazriya made a comeback with the Prithviraj-starrer, Anjali Menon film, Koode, after taking a break from films following her marriage to Fahadh Faasil. In 2020, she acted in the film Trance along with her husband after a year break from Koode, and her acting is highly appreciated. Her role on Trance is different from other roles she did in her career as she comes out of the cocoon of her cute, cuddly, and naive “Nazriya-like” characters with the bold and scintillating character of Esther Lopez.

In January 2014, Malayalam film actor Fahadh Faasil announced to the media that he was set to marry Nazriya.[25] The pair got to know each other more on the sets of Anjali Menon’s Bangalore Days (2014), in which they played the roles of husband and wife. Fahadh and Nazriya revealed that their parents played a pivotal role in arranging the marriage. The pair were engaged in February 2014, before having a wedding ceremony on 21 August 2014 at Thiruvananthapuram.

Future of Nazriya Nazim in 2022

Hirav Shah adds, “According to the planetary positions in her horoscope, it is the perfect time for Nazriya to move to the Bollywood industry and explore bigger stardom. In 2022, she is making her Tollywood debut with Ante Sundaraniki which will be a super hit. Nazriya Nazim will also start a family soon and her marital life with Fahadh Faasiil will be smooth.”

Birthday Predictions: “What’s in Store for Sherni of Bollywood Vidya Balan in 2022?”

Birthday Predictions: A Messy Divorce, Controversies, Movies... What's Next for Hrithik Roshan in 2022?