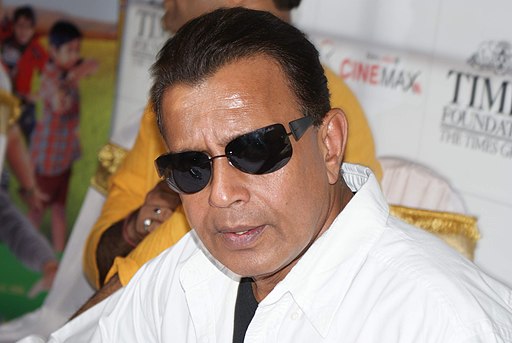 Mithun Chakraborty, born as Gouranga Chakraborty on 16 June 1950 is one of the most famous Bollywood actors and also a singer, producer, writer, social worker, entrepreneur, a television presenter who works predominantly in Hindi and Bengali films. He is a former Rajya Sabha Member of Parliament. He is the recipient of two Filmfare Awards and three National Film Awards.

Chakraborty made his acting debut with the art-house drama Mrigayaa (1976), for which he won his first National Film Award for Best Actor.[7] Chakraborty played Jimmy in the 1982 film Disco Dancer, which was commercially successful in India and the Soviet Union and Russia. Besides Disco Dancer, Chakraborty is also remembered for his performance in films such as Surakksha, Sahhas, Wardat, Wanted, Boxer, Pyar Jhukta Nahin, Pyari Behna, Avinash, Dance Dance, Prem Pratigyaa, Mujrim, Agneepath, Yugandhar, The Don, and Jallaad. In 1991, he won the Filmfare Award for Best Supporting Actor for his role as Krishnan Iyer Nariyal Paniwala in the film Agneepath.

He is the record holder in the Limca Book of Records for 19 movie releases as lead actor in the year 1989 and the record is still unbroken in Bollywood as of July 2020.

Chakraborty owns the Monarch Group, which has interests in the hospitality and educational sectors. He has also started the production house Paparatzy Productions. In 1992, he, along with Dilip Kumar and Sunil Dutt, set up a trust to help needy actors called Cine & T.V Artistes Association (CINTAA). He was also the Chairperson of Film Studios Setting & Allied Mazdoor Union, which takes care of the welfare of cine workers and resolves their demands and problems. The television show Dance India Dance where Chakraborty is the Grandmaster has already been entered in the Limca Book of Records and the Guinness World Records[19] Chakraborty played a crucial role of mediator between Pranab Mukherjee and Mamata Banerjee, winning the Congressman the support of the Trinamool chief in the 2012 presidential election.

A comic book named Jimmy Zhingchak has been made based on Chakraborty.

Future of Mithun Chakraborty in 2021

Mithun Chakraborty is entering his 72nd year. 7+2=9 which is ruled by Mars.

Last year, Mithun Chakraborty was in his 71st year which adds to 7+1=8 and is ruled by Saturn the extreme number and that was not a favorable number for him at all, says Hirav Shah.

“Mithun Chakraborty’s political stint in 2021 after he joined BJP was a disaster. Mithun Chakraborty’s statement that he is a COBRA fell flat and his charisma did not work in BJP’s favour. It will be better for the veteran actor to remain focused on films in 2021. Mamta Banerjee has emerged as an unbeatable force in Bengal and Mithun might have to face dire consequences if he goes against her. His upcoming film The Kashmir Files and Bhootiyapa will be average films and if Mithun da wants people to remember him as a great actor, he should choose roles that suit his stature and talent,” says celebrated Astro Strategist™ cum Political Astrologer Hirav Shah.