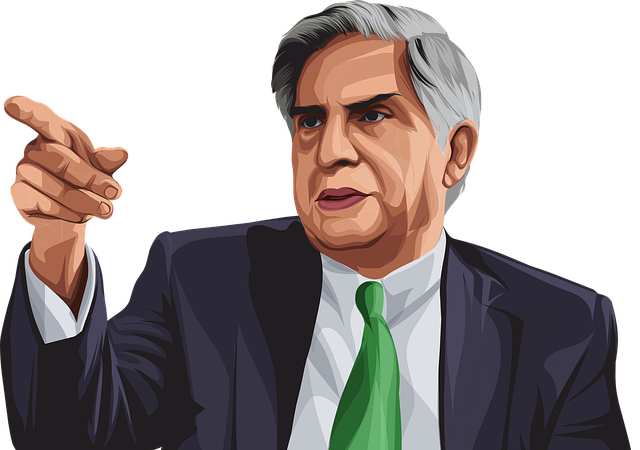 Ratan Tata is considered one of India’s most respected businessmen spearheading the country’s largest conglomerates which comprise nearly 100 firms with revenues worth $100 billion. The legendary scion has taught the world to do business with dignity and values. The 83-year-old business mogul, though in his senile state continues to inspire future entrepreneurs to take a step in the right direction.

Here are 5 important lessons to acquire from Ratan Tata.

If there is one corporation that has managed to withhold its dignity and values throughout the century, it’s the Tata Company and if there is one industrialist who deserves all the credit for its success, it’s Ratan Tata.

The benevolent industrialist, philanthropist and former chairman of Tata Sons was born on 28th December 1937 in Surat, making him a celebrated Capricorn. His accomplishments and victories go beyond textbook achievements. He has managed to receive Padam Vibhushan and Padam Bhushan in the years 2008 & 2000 respectively for his contribution towards trade and industry, making him the only businessperson to do so.

The 83- year-old business magnate has managed to spearhead the company from a $1.5 million market cap to a $100 billion market cap making him a living legend in India’s general consciousness.

The Tata group is an Indian Multinational Conglomerate Company known for manufacturing automobiles, airplanes and other products. The company was founded in 1868 by Jamshedji Tata and has managed to retain its name as one of India’s oldest industrial groups. With over 100 companies under its Umbrella working across 150 countries, Tata Group is the 7th largest private company with maximum employees.

If you think about it, many companies entered the Indian market and left without a trace. Throughout the year, Tata managed to triumph even in the face of adversity. And the credit goes to none other than Ratan Tata himself. Known as the Titan of Indian Industries, the business magnate has time and again proved that businesses can be profitable yet ethical and socially accountable. Such is the legacy of Ratan Tata that inspires many entrepreneurs of today’s generation.

1- Leaders must be great visionaries

A business without a vision is bound to fail. Therefore, a leader must be able to envision the success of the company before it happens. When Ratan Tata joined the group, they were not doing any business globally. However, he was adamant about making the venture global. As a result, now half of Tata’s revenues come from overseas. In the coming years, the Tata group managed to acquire brands like Tetley, Jaguar Land Rover, and Taj Boston under his leadership which helped the company soar to new heights.

2- A leader must give back

The true hallmark of a leader is evident from the way he/she treats his/her people. Ratan Tata never shied away from helping his employees- be it countless charities or the trusts he opened in his name. His selfless devotion towards his people teaches us to be generous every step of our way.

Ratan Tata strictly believes in the three values, i.e. Trust, Values and Commitment. The Tata group prides itself on maintaining the highest dignity and not compromising its morals for menial profits. Ethoses like these are hard to find in today’s world, making Tata one of the most trusted organizations by the people.

When you are at the top of your game, there is no one to look up to. So, it is pertinent that you have faith in your decisions and be adamant about them. In Ratan Tata’s words, “I don’t believe in taking right decisions. I take decisions and then make them right.”
You must believe in yourself to make a firm decision and hustle hard to make it worthwhile.

working at a safe pace would put you in a dark limbo- where you would be stuck forever without seeing much profit. The ability to break free from the comfort zone is the key to gaining new markets and prospering. And to think of it, it is because of the bold step taken by Tata motors to acquire Jaguar Land Rover that helped them boost profits. If you are in a business, you need to make difficult choices and take unprecedented risks.

Anyone can be an industrialist by making huge investments and turnovers. However, not everyone can be a leader. A leader sees the potential of his/her people and channelizes them. A leader is a visionary, a people’s people and most importantly a risk-taker.

Many leaders will come and go but none can be like Ratan Tata- a perfect embodiment of benevolence, ruthless determination and humility.

With this, India’s beloved Astro Strategist™ and Business Astrologer™ Hirav Shah bid you his farewell.

Importance of Mobile App Development and its challenges

Impact of Positive Thinking on Life and Career

5 Success Mantra To Take Away From Nykaa CEO Falguni Nayar