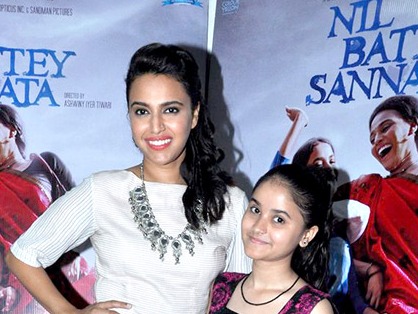 Swara Bhaskar (born 9 April 1988) is one of the most popular actresses of Indian cinema who is always in the news more for her off-screen controversies than her on-screen performances, even though she is a fine actress. Best known for her supporting work in mainstream productions and starring roles in independent films, she has won two Screen Awards and has been nominated Filmfare Award on three occasions.

Swara, the daughter of naval Commodore C. Uday Bhaskar (Retd.), was born and raised in Delhi. After receiving her bachelor’s degree in English literature from the Miranda House, she enrolled herself at the Jawaharlal Nehru University to complete her master’s in Sociology. Swara made her film debut with a supporting role in the 2009 drama Madholal Keep Walking, a commercial failure. She achieved wider recognition for her supporting role of a bride-to-be in the commercially successful romantic comedy Tanu Weds Manu (2011). Her performance in the film was well received by critics and she garnered a Filmfare Award for Best Supporting Actress nomination.

Swara garnered further praise for her performance in the critically acclaimed romantic drama Raanjhanaa (2013), the role earned her second Filmfare Award for Best Supporting Actress nomination. She then reprised her role from Tanu Weds Manu in the film’s sequel and later appeared in the romantic drama Prem Ratan Dhan Payo; both productions were among the highest-grossing Bollywood films of 2015. Her starring roles in the independent films Nil Battey Sannata (2016), and Anaarkali of Aarah (2017) earned her further acclaim. She won the Screen Award for Best Actress (Critics) for the former and was nominated for Filmfare Critics Award for Best Actress for the latter.

Future of Swara Bhaskar in 2021

“Swara Bhaskar may get some good offers especially after September 2021, she will be on an upswing. Her upcoming films like Sheer Qorma and some other web series will bring her a good name but she needs to up her game. She needs to target the A-list hero films with top directors. She takes a stand on many issues of the country, speaks a lot about her strong character but she should first focus on success, money and consistency in the film industry. A strong brand gives a stronger voice. So she can impact more on the issues and will be able to change perception also.” explains Celebrity Astrologer Hirav Shah.

“2022 and 2023 will be very good years for her to make it more fearless Swara Bhaskar with strong success in Bollywood,” says noted Bollywood Celebrity astrologer Hirav Shah.