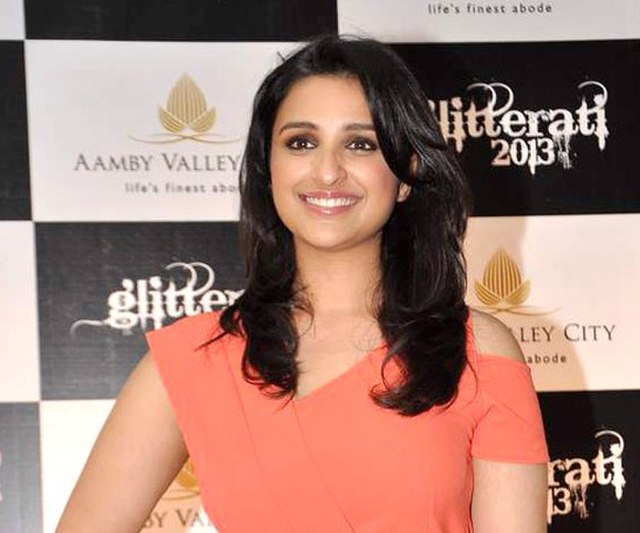 Parineeti Chopra born 22 October 1988 is one of the hottest and most promising Indian actresses and also a singer who appears in Hindi films. Chopra is a recipient of several accolades, including a Filmfare and National Film Award. She has been appearing on Forbes India’s Celebrity 100 list since 2013.

Chopra initially aspired to pursue a career in investment banking, but after obtaining a triple honors degree in business, finance, and economics from Manchester Business School she returned to India during the 2009 economic recession and joined Yash Raj Films as a public relations consultant. Later, she signed a deal with the company as an actress. Chopra made her acting debut with an acclaimed performance in the 2011 romantic comedy Ladies vs Ricky Bahl, winning the Filmfare Award for Best Female Debut and a Best Supporting Actress nomination.

She followed it by garnering widespread critical acclaim for her starring roles in the box office hits— Ishaqzaade (2012), Shuddh Desi Romance (2013), and Hasee Toh Phasee (2014). The first of these won her the National Film Award – Special Mention while the first two of these earned her two nominations for the Filmfare Award for Best Actress.

After a three-year hiatus from full-time acting, her career saw fluctuations with occasional successful films with the comedy Golmaal Again (2017) and the war drama Kesari (2019) in between. In 2021, Chopra earned renewed critical acclaim for her leading roles in the black comedy Sandeep Aur Pinky Faraar and the biographical sports drama Saina.

In addition to her acting career, Chopra is a humanitarian and is a prominent celebrity endorser for brands and products. She has sung several of her songs, including Maana Ke Hum Yaar Nahin, which garnered her praise.

Parineeti Chopra has entered the 34th year of her life. 3+4= 7 ruled by Ketu.

Parineeti’s career has been in the dumps for the past few years due to her poor movie choices.

“According to the planetary positions in her horoscope, the future looks bright. In 2022, Parineeti will star in some exciting projects like Animal with Ranbir Kapoor, Uunchayi with Sooraj Barjatya, and many others. Parineeti starts looking out for roles with big banners and stars. She can do a web series to explore her talents and she also needs to up her glamor quotient to give a fight to the likes of Kriti Sanon, Pooja Hegde, Shraddha Kapoor, and others. Her personal life will be exciting and she might find her true love soon,” says Bollywood astrologer cum Astro strategist Hirav Shah.