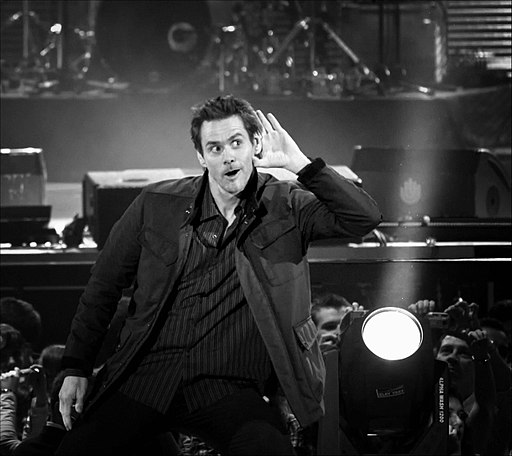 James Eugene Carrey (born January 17, 1962) is a Canadian-American actor, comedian, and writer. Known for his energetic slapstick performances, Carrey first gained recognition in 1990, after landing a regular role in the American sketch comedy television series In Living Color. His first leading roles in motion pictures came with Ace Ventura: Pet Detective (1994), The Mask (1994), Dumb and Dumber (1994), and Ace Ventura: When Nature Calls (1995), as well as portraying the Riddler in Batman Forever (1995), and the lead role in Liar Liar (1997).

Although largely typecast as a comedic actor, Carrey has had success in dramatic roles. His first dramatic success was for starring in the Emmy-nominated made-for-television film Doing Time on Maple Drive (1992). Carrey gained attention for his leading roles in The Truman Show (1998) and Man on the Moon (1999), earning Golden Globe Awards for each film. He later starred in the psychological science fiction romantic drama film Eternal Sunshine of the Spotless Mind (2004), this performance is repeatedly lauded as one of the most important and seminal in Carrey’s career and for which he was nominated for both the BAFTA Award for Best Actor in a Leading Role and another Golden Globe Award. He was also praised for his dramatic role of Jeff Piccirillo in the Showtime tragicomedy series Kidding. The Guardian named him one of the best actors never to have received an Academy Award nomination.

Jim Carrey’s zodiac sign is Capricorn and is ruled by Saturn.

Hollywood Astrologer Hirav Shah predicts, “Career-wise, Jim Carrey starts to sign more films and get busier than ever as his fans are waiting to see the vintage Jim Carrey also 2021 can be a game changer and comeback year for Jim Carrey.”

Home » Celebrity-Horoscope » Will 2021 Mark The Comeback Year For The Phenomenally Talented Jim Carrey?