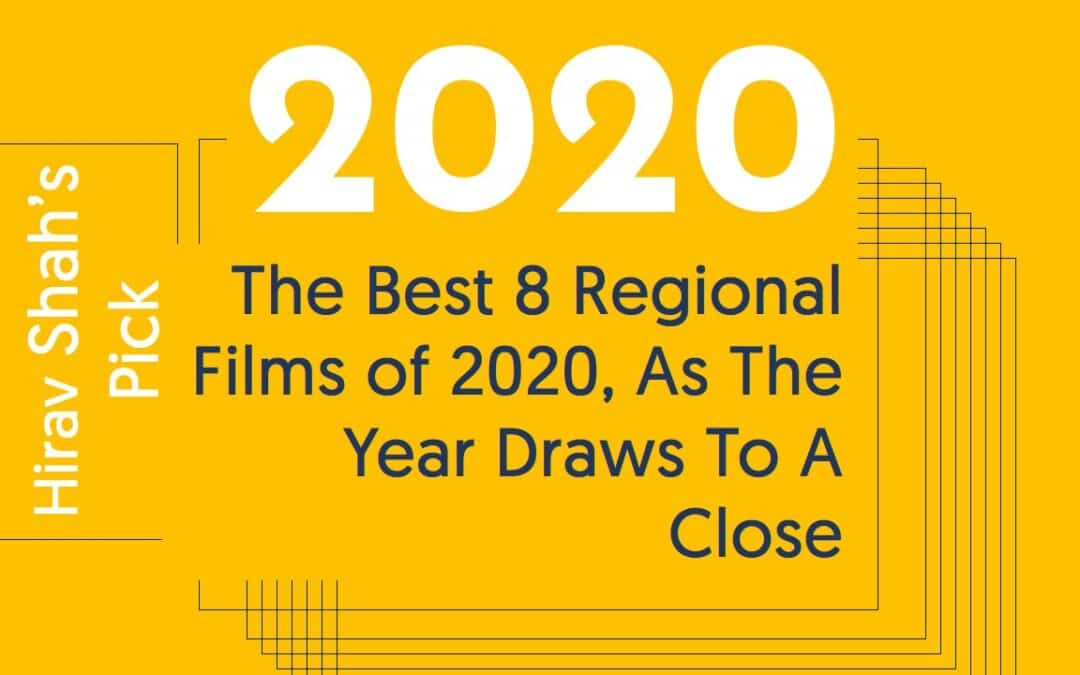 The pandemic brutalized the film industry, closing theatres and shutting down production and changed movies. In a nutshell , it has been an exceptional year because of COVID-19, with theatrical, festival, online and related film screenings of 2020 delayed or in a flux. Despite everything, filmmakers still made films-and miracles happened, Expresses Hirav Shah, Movie Industry’s Most Influential Strategist, Advisor and Consultant.

Meanwhile, Shah Pens Down The Best 8 Regional Films of 2020, As The Year Draws To A Close !!

This Trivikram Srinivas blockbuster, starring Allu Arjun, revolves around a baby swap. A middle-class man jealous of his wealthy employer swaps his son with the latter’s. His logic is that at least his son will enjoy the comforts he doesn’t have. The “plot” is older than the hills, but what stands out in this all-out masala entertainer is the effort that’s gone into writing the outrageous, “illogical”, OTT moments. We buy into it all because the makers buy into it all. They whole-heartedly believe in every single moment, even the stretch where hit songs of Telugu heroes are played in a boardroom meeting. This conviction is everything, and you just don’t find it outside Telugu cinema.A Wave In Vaikuntapuram Sweeps Over Tollywood, And Allu Arjun’s Riding It.

Mysskin’s latest is dedicated to Alfred Hitchcock, and the homage extends to the deepest theme in Hitchcock’s similarly titled blockbuster: the dysfunctional relationship between a “mother” and a “son”, which results in the latter becoming a serial killer. The director strips the genre of its must-haves, and instead of a thriller we get a drama about the redemption of a brutally damaged man, who’s treated with as much compassion as his victims. For Mysskin fans, the film is a gift that keeps on giving. The jaw-dropping cave sequence at the end, is so singular in its blend of religious pageantry and gladiatorial spectacle, it could have come from no one else.

Varane Avashyamund is a 2020 Indian Malayalam-language comedy-drama film written and directed by Anoop Sathyan (in his directorial debut) and produced by Dulquer Salmaan. The film stars Suresh Gopi, Dulquer Salmaan, Shobana and Kalyani Priyadarshan. It has music by Alphons Joseph.Principal photography began on 1 October 2019 at Chennai, Tamil Nadu. The film was released on 7 February 2020.
Anoop Sathyan makes a delectable cream puff of a movie from the heaviest ingredients: a soldier (Suresh Gopi) suffering from some sort of PTSD, a single mother (Shobana) and her romance-averse daughter (Kalyani Priyadarshan), and two siblings (Dulquer Salmaan, Sarvajith Santosh Sivan) with a truly ghastly history. The director chooses to discard microscopic detail in favour of broad arcs and happy-making vignettes.

Ayyappanum Koshiyum is a 2020 Indian Malayalam-language action thriller film written and directed by Sachy. It was produced by Ranjith and P. M. Sasidharan under the company Gold Coin Motion Picture Company. The film stars Prithviraj Sukumaran and Biju Menon in the title roles. The story revolves around the conflict between Koshy Kurien, an influential and wealthy ex-Havildar and Ayyappan Nair, a Sub-inspector in Attappadi. The music was provided by Jakes Bejoy

One of the social-media highlights of the year was Prithiviraj’s note to Sachy, who died tragically young. (Reading it, I wept.) Based on this clash-of-egos saga (between the characters played by Prithviraj and Biju Menon), the director was destined for great things. The storyline is unremarkable, but Sachy’s treatment is epic.

In Anwar Rasheed’s ambitious (perhaps too ambitious) drama, Fahadh Faasil is stunning as a small-time motivational coach who becomes a faith healer. Vincent Vadakkan’s screenplay is most indicative of the film’s ambition. In a typical narrative arc, the protagonist falls and then rises. Trance inverts this trajectory. Its biggest “high” is at the interval point, and thereafter, its a hell of a time watching the two halves loop in on one another, like a demented pair of twins. The film has its flaws (notably the Nazriya Nazim character), but it’s thrillingly original. It screws around with your head like a faith healer brainwashing his flock.

C U Soon is a 2020 Indian Malayalam-language computer screen film written and directed by Mahesh Narayanan.The film is set in computer screen and stars Fahadh Faasil, Roshan Mathew and Darshana Rajendran, with Saiju Kurup, Amalda Liz and Maala Parvathi in supporting roles.Produced by Fahadh Faasil and Nazriya Nazim, the film was released on 1 September 2020 on Amazon Prime Video.
From the global sprawl of Take Off, Mahesh Narayanan (with his superb cast of Fahadh Faasil, Roshan Mathew, Darshana Rajendran) shrinks his vision to a series of screens that span the globe, enabling worldwide access from the confines of homes. Instead of characters’ points of view, we see a story unfold from the screens’ point of view. The film is a missing-person mystery. It’s also a time capsule of our relationship to (and reliance upon) modern technology, and of our lives in the COVID-19 era. c u soon seems to be asking: Do you really need to step out anymore, even to watch this movie?

Paava Kadhaigal is a 2020 Indian Tamil-language anthology film directed by Sudha Kongara, Gautham Menon, Vetrimaaran and Vignesh Shivan. The series explores how pride, honour, and sin influence complex relationships of love.The anthology features an ensemble cast of Kalidas Jayaram, Shanthnu Bhagyaraj, Bhavani Sre, Anjali, Kalki Koechlin, Padam Kumar, Simran, Gautham Menon, Aadhitya Baaskar, Prakash Raj, Sai Pallavi and Hari Krishnan. The anthology was released on Netflix on 18 December 2020.
The year of COVID-19 was also the year of the anthology. OTT platforms seemed to be in a race, scrambling to lasso big-name directors to make short films, and Paava Kadhaigal is easily the best of the bunch.

8. THE DISCIPLE by Chaitanya Tamhane, Marathi

The plot is that, Sharad Nerulkar has devoted his life to becoming an Indian classical music vocalist, diligently following the traditions and discipline of old masters, his guru, and his father. But as years go by, Sharad starts to wonder whether it’s really possible to achieve the excellence he’s striving for. It was in the main competition at the Venice Film Festival, where it won Best Screenplay and the FIPRESCI Film Critics’ Award. Executive Producer Oscar-winner Alfonso Cuaron. About a devoted Hindustani classical music vocalist who finds his commitment to his art challenged in today’s times.

“2021 promises a return to a semblance of normalcy, and this is one reason to be excited about the new year.
As 2020 ends, many businesses are left counting their losses and re-strategizing for 2021, for productivity .
Not just re-strategy, but “moral and astro-strategical support” is also a requisite today.
And it can only happen through an Astro-Strategic analysis.
Only Astro-Strategy, which provides Strategical, Moral and Astro Strategical support, can increase productivity by 96%,”Quotes Hirav Shah, Celebrated Astro-Strategist and Business Astrologer.