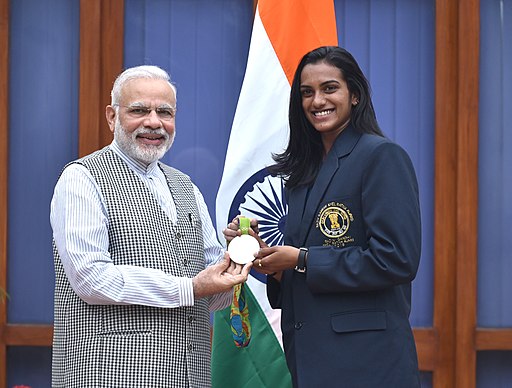 There have been a few notable women in Indian sports in the past. No one can forget the famous P.T. Usha back in the day won numerous medals, for example, nor can they forget her contribution to putting India on the world map of sports. Until recently, however, such stars have been few and far between.

Meanwhile, there is one star today who is the face of Badminton in India, sometimes the face of Sports in India too.She is one of the most celebrated Indian sports personalities today whom we all are really proud of.

Pusarla Venkata Sindhu also known as PV Sindhu. Yes, she is the epitome of success, grit and determination says Hirav Shah, The Most Influential Adviser and Consultant in Sports.

Pusarla Venkata Sindhu (born 5 July 1995) is an Indian professional badminton player. Having made her international debut in 2009, she rose to a career high ranking of no. 2 in April 2017. Over the course of her career, Sindhu has won medals at multiple tournaments including Olympics and on the BWF circuit including a gold at the 2019 World Championships. She is the first Indian to become the Badminton World Champion and the first Indian woman to earn an Olympic Silver medal.

Sindhu broke into the top 20 of the BWF World Ranking in September 2012 at the age of 17.Beginning in 2013, Sindhu won a medal at every world championships, with the exception of 2015. She is just the second woman after Zhang Ning to win five or more medals at the world championships. Sindhu represented India at the 2016 Summer Olympics, becoming the first Indian badminton player to reach a final. She won the silver medal after losing out to Spain’s Carolina Marin.

Sindhu won her first superseries title at the 2016 China Open and followed it up with four more finals in 2017, winning the titles in South Korea and India. In addition to that, she has won a silver medal each at the 2018 Commonwealth Games and 2018 Asian Games, and two bronze medals at the Uber Cup.

Coach and His Strategic Guidance

Gopichand took personal interest in Sindhu’s growth as a badminton player of world class. He was most meticulous, humble and selfless in his approach. Gopichand used to be the first person to arrive at the PG Badminton Academy every day at 4 am and prepare for the tough training schedule of his wards – Sindhu & Srikant Kidambi, in particular. He made elaborate notes about their game and analyzed it with them. His true passion for the game was a constant source of inspiration for them.

Sindhu owes her stupendous career rise to the untiring efforts of Gopichand. He instilled into Sindhu the virtues of mental toughness and killer-instinct required for success in the tough international arena. The results are there now for the world to see !!

With earnings of US$8.5 million and $5.5 million respectively, Sindhu made the Forbes’ list of Highest-Paid Female Athletes in 2018 and 2019. She is the recipient of the sports honour Rajiv Gandhi Khel Ratna, and India’s fourth highest civilian award, the Padma Shri. She was also honoured with Padma Bhushan, the third highest civilian award in India, in January 2020.

Looking at Sindhu’s career graph, you might wonder whether you will now be able to swim upstream in your respective career too !!

Whether you will succeed and when will you succeed !

Well, if you are a sportsman facing difficulty in decision making, then it’s advisable to consult an expert and take ‘A-Z Astro Strategic opinion’ .
Well, the great news is that, The World Famous Astro-Strategist, Hirav Shah., whose answers have proven to be game changers in all fields, is just a question away from you.

Also, Hirav Shah has shared his valuable life-changing advisory below :