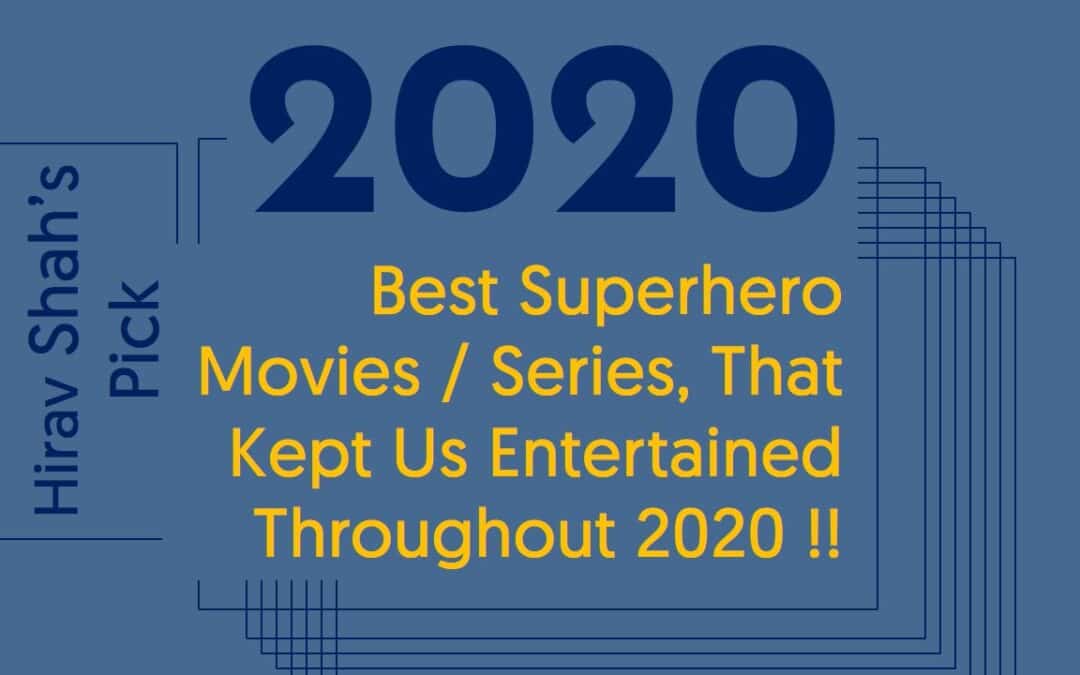 2020 was the year that no one wanted, but couldn’t escape from: the deadly virus was, and is still, around us.

Everything changed. We were forced to clamp down on so many things we took for granted, especially those activities which led us towards gathering in large numbers. The movie hall became one of the first places to be ruled out of bounds; now, when theatres are slowly opening up, we are still reluctant to return to a place which entertained us, and transported us.

Meanwhile, few superhero movies infused the super-hero inside us, the hope and positivity inside us in such testing times.
Here’s the best of the super-hero movies/series, picked by Business Astrologer Hirav Shah that entertained and also uplifted us in 2020.

Based on the Marvel comic, the powerful combination of Nicholas Cage and Sam Elliott makes the film Ghost Rider a fun ride. Cage plays Johnny Blaze, a motorcycle stunt rider, who turns into Ghost Rider every night after being tricked into making a deal by selling his soul to the Demon Mephistopheles (Peter Fonda). One of his superpowers is the Penance Stare – a supernatural ability that incapacitates victims when he locks eyes with his opponent.

Give this super-hero film a watch for some action-packed performances and some sweet romance between Johnny and his childhood sweetheart Roxanne Simpson (the stunning Eva Mendes). Also, look out for a young (and brunette) Rebel Wilson in a small role as a girl in the alley who gets saved by Ghost Rider from a purse snatcher!
Overall this film will boost your self-confidence and will make you feel hopeful.

This Amazon Original series is dark yet hilarious. It provides witty commentary on the current climate of hero worship, social media and more. Here the superheroes are controlled and created by the powerful corporation Vought International that markets and monetises them. Even though the show starts with the leader of the superheroes Homelander (Antony Starr) saving the day by foiling a bank robbery and even taking selfies with starstruck fans thereafter, he’s at heart a violent narcissist.

Not only is Vought’s premier superhero team The Seven is a sly take on Justice League but there are more cliched comic book tropes from both Marvel and DC that The Boys make a parody out of throughout the show. The Boys will provide you enough dark humour on the matter that’d help you chuckle and rethink about watching Avengers: Endgame for the n-th time. Also, good news for the fans who’ve already finished watching both the seasons of The Boys – a third season has been ordered and a spin-off series is already in development.
This series will surely elevate your morale and self-confidence.

A parody of American superheroes, The Tick is funny, endearing and highly enjoyable to watch. The writing is sharp and takes a jab at superhero movies exceedingly well in this two-season series. The Tickhas been adapted from Ben Edlund’s comic book character of the same name which was a satirical send-up of superhero tropes. Peter Serafinowicz plays The Tick (dressed up in a blue tick suit) along with his mild-mannered sidekick Arthur Everest (Griffin Newman) who struggles with mental health issues ever since he witnessed his father get killed as a child by the supervillain The Terror (Jackie Earle Haley).

The Tick is one of those shows that gets even better in its second season where it focuses on the reopening of A.E.G.I.S, a federal agency tasked with working with superheroes and fighting super villains (Marvel’s S.H.I.E.L.D, anyone?). In roughly 30-minute episodes, The Tick packs enough punch for you to feel exhilarated and inspired.

Even though this film starts with G-Girl (Uma Thurman) foiling a jewel heist like a typical superhero, she’s anything but typical. When she’s not saving lives and the city of New York from several catastrophes, she’s a clingy, over-possessive and controlling girlfriend to Matthew Saunders (Luke Wilson) who’s desperate to get out of the relationship because of her neurotic behaviour.

Thurman plays the two avatars of G-Girl and Jennifer Johnson with equal elan. G-Girl has a lot of superpowers like the power to fly, superhuman strength, speed, invulnerability, super breath, and heat vision after she was accidentally exposed to radiation from a crashed meteorite as a teenager. But she’s anything but perfect. In fact G-Girl is more human than a superhero.

This film is a cheerful and colourful take on the superhero genre with a powerful message about empowering the younger generation.

Famed Astro-Strategist and Business Astrologer, Hirav Shah Concludes –
“If you’re like most people, you might not want to revisit the painful events of 2020 as we close out the year. Understandable. The pandemic has left an indelible mark on every aspect of our lives. And it has altered how we live, entertain ourselves, shop and work. We have faced the worst economic crisis in history. However, there is nothing that can stop us from being an achiever in 2021.
Astro-Strategy certainly can guide and direct us.
Astro-Strategy can give us CERTAINTY OF SUCCESS in any field with a clear path of action”.

4 Outstanding Benefits of Starting Your Startup in a Coworking Zone