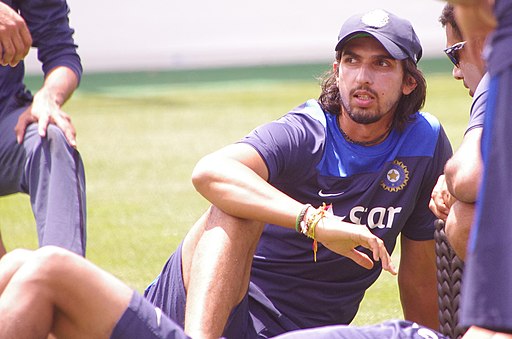 Cricket requires a fusion of physical and mental strength. The players need to have the stamina to play for hours on the field while trying to figure out ways to outsmart their opponents.

Several players have represented the Indian cricket team at the world stage and have performed and become stars, Says Hirav Shah, who is Himself a National Chess Player, qualified National Volleyball Player and a Celebrated Sports Astrologer.

Ishant Sharma (born 2 September 1988) is one such star Indian cricketer who has represented India in Tests, ODIs and T20Is. He is a 1.93 m (6 ft 4 in) tall right-arm fast-medium bowler. He is currently in his 33rd year. Sharma Is In His Best Phase Right Now, Opines Shah.

At the age of 18, Sharma was called to join the Indian squad for the tour of South Africa in 2006–07. However, after receiving the call and organising travel arrangements, he was deselected. In reference to his height and lean physique in his Under-19 days, the bowler was nicknamed Lambu. In 2011, he became the fifth youngest player to take 100 Test wickets. Against South Africa in 2013,

Ishant Sharma became the fifth quickest Indian to grab 100 ODI wickets. While being a “rhythm” bowler, he still is considered one of the fastest Indian bowlers having bowled in excess of 150 km/h on several occasions in international cricket as well as the IPL, his fastest being 152.2 km/h bowled to Ricky Ponting on Boxing Day Test in 2011. In 2020, Indian government awarded him the prestigious Arjuna Award to recognize his outstanding achievement in cricket.

In February 2021, during the series against England, Ishant took his 300th wicket in Test cricket. During the same series, Ishant played in his 100th Test match, thus becoming the only Indian fast bowler to play 100 Tests after Kapil Dev (131 Tests).

Ishant plays for Delhi in domestic cricket and has taken 68 wickets in 14 first-class games, including a five-wicket haul against Baroda on the opening day of a match Delhi drew after failing to bowl Baroda out on the fourth day.

Ishant toured England with the India Under-19s in 2006 and Pakistan in 2006–07. He played three youth tests and six youth One Day Internationals for India. On the basis of his strong performance in Australia in 2008, Ishant Sharma was bought for a winning bid of $950,000 by Kolkata Knight Riders in the player auction for the Indian Premier League. This was the highest amount paid for any bowler in the tournament.

On 15 February 2018, it was officially announced that Ishant will join Sussex CCC for the first two months of the 2018 county season, available from 4 April to 4 June 2018, thus making him the 9th Indian to play for Sussex.

In May 2007, Sharma was selected in the test team for the Bangladesh tour and played as a replacement for the fast bowler Munaf Patel. Over there he played for his national side in the second test where he bowled three overs including one maiden and conceded only five runs without taking a wicket. Later on, he was called for the tour of England in July–August 2007. He played a number of matches post this.

In the 2011 IPL auction, Sharma was bought by the Deccan Chargers; he hoped that his performance in the competition would give him a chance to impress selectors and push for selection in India’s ODI team. From 12 matches, Sharma took 11 wickets at an average of 28.54.

A month after the IPL, which was held in April and May, India toured the West Indies for five ODIs and three Tests. Several senior players were rested from the ODI side and others absent through injury; this mostly affected the batsmen but Zaheer Khan missed the ODI series. India won the first three ODIs, and Sharma was called into the team for the fourth, his first ODI since August 2010. He managed one wicket from two matches in the series while conceding 109 runs.The first Test resulted in a win for India and Sharma took three wickets in each innings.

He claimed his 100th Test wicket in the second Test, becoming the fifth youngest to reach the landmark; the fixture was also the first time he took ten wickets in a match for India.He played innumerable matches after this.

In August 2018, during the fourth Test against England, Sharma took his 250th Test wicket. In the fifth test, he took 3 wickets in England’s first innings and thereby equaled Kapil Dev’s record of taking the most number of wickets by an Indian bowler in England. He finished the series as the second-highest wicket taker, with 18 wickets. In India’s tour of Australia, he took 11 wickets in the first 3 tests, before being ruled out of the final test due to an injury.

In August 2019, Ishant took his 9th Test 5-wicket haul against West Indies in the 1st Test match of India tour of West Indies 2019, at the Sir Vivian Richards Stadium, with figures of 5/43 in the 1st innings. In the 2nd Test match of the same series, batting at No.9, Ishant hit his first half-century in Test Cricket. In February 2021, Ishant completed his 100th Test match against England in the third Test match (2nd day/night Test in India) of England Tour of India, at the Motera Stadium.

Astrological Analysis For A Cricketing Career

Mars is the main planet which inspires sportsmanship in astrology. It makes a person courageous, energetic, patient, quick decision-maker and powerful and this quality is necessary to become a cricketer.

When Mars is in exaltation, it shows that the person has good resistance ability and can win over his rivals.

Actually, physical fitness and stamina required for a successful career in sports are possible only through the strong placement of Mars. Mars makes the person more diligent, as well as when Mars is placed in the favourable house or in his own house, it makes the person very strong and determined.

It is a planet of intellect. The strong Mercury in the birth chart indicates the level of analytical abilities of the person.

You must have a strong sun in your horoscope to become a player. This is a planet of Name-fame and recognition. The Sun planet is the significator of the soul, hence a strong Sun in the horoscope will give a strong body and physical strength.

It gives a sense of victory in the game. The role of Rahu is very important for success in sports especially in the present era where a lot of glamour, fame and respect is involved with the sportsman. The positive attitude is necessary for the victory which comes from the favourable placement of Rahu in the horoscope.

The mental strength and stability of a person are analyzed on the position of the moon in the horoscope. The Moon is the significator of mind. Exalted Moon provides success in all domestic Cricket and International Cricket.

A person does not panic even after facing many problems when the Moon is strong, rather he works patiently. Strong Moon is another factor to build a career in Cricket as it helps to overcome potential, physical injuries while playing.

Saturn plays an important role in making his career in Cricket. Even if you have talent, but Saturn is in an adverse position, it will not give you a chance to play. Even if Saturn is favourable and time is unfavourable, it will definitely help you in winning over enemies.

Qualified National Level Volleyball Player and National Chess Player Hirav Shah’s extraordinary Business strategies revolve around teams rather than individuals. Hirav’s experience with any team sport offers a deeper understanding of the spirit and multiple verticals involved while working in a team.

Meanwhile, Hirav Shah’s tools and strategies have not just helped cricketers or any sportsperson immensely, but his Astro-Strategical analysis also have been game-changers for many struggling ventures, sports leagues and team owners. Certainly, there are a myriad ways by which Astro-Strategy can aid them.

“And Only Astro-Strategy can give CERTAINTY OF SUCCESS in any field of the world with a clear and definite path of action”, Concludes Celebrity Astrologer Hirav Shah.

Significance Of Bowling Action In Cricket !

Will Shikhar Dhawan hit his Shikhar (peak) in 2021?