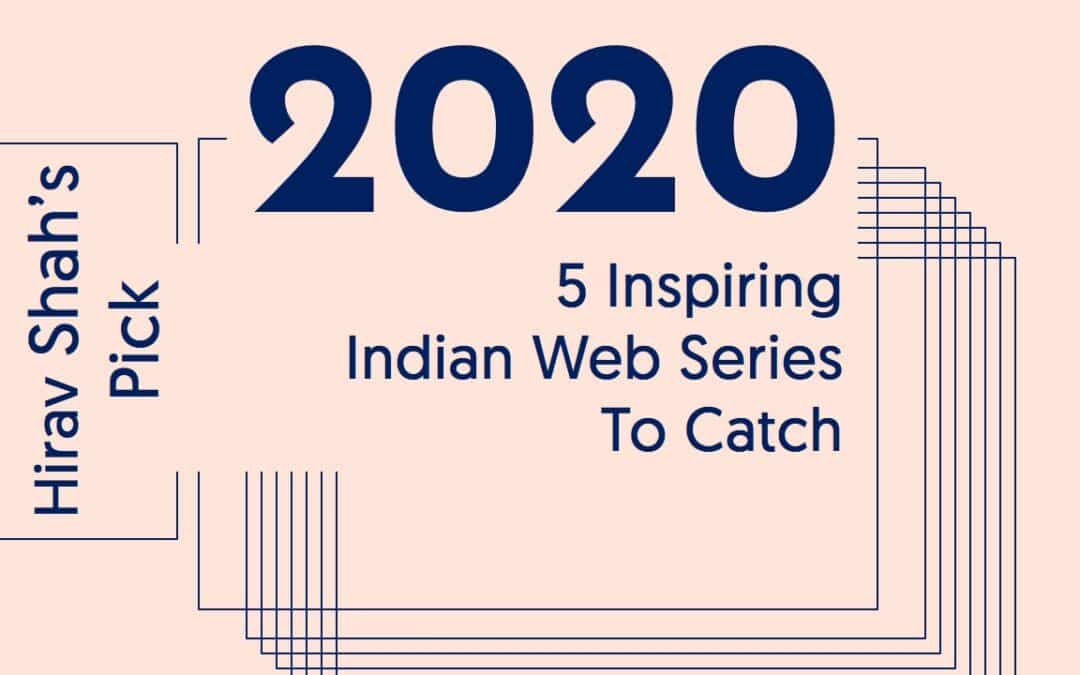 Inspiration awakens us to new possibilities by allowing us to transcend our ordinary experiences and limitations. Inspiration propels a person from apathy to possibility, and transforms the way we perceive our own capabilities.

All of us look for inspiration in different ways. Meanwhile, a good uplifting web-series in the evening, can always help in inspiring. They make us appeal to greater things and strive higher to become who we want to be, says Hirav Shah, Movie World’s Most Influential Adviser and Strategist .

Hirav Shah opines-Whether it’s a biopic celebrating someone who turned the world upside-down for the better, a sports film with “Eye of the Tiger” on repeat, or a tale of overcoming adversity, some web-series simply have a knack for lifting us up and inspiring us to do more and be more.

They make us laugh, they make us cry, they even make us cheer! When we see underdogs take on extraordinary goals, despite all adversities and difficulties, we can relate to them. We all need inspiration. Dealing with neck to neck competition in the modern era, sometimes we get tired of trying and want to give up.

But these web-series make us look inside ourselves and, often, can be used as inspiration themselves. So to that end, here’s a list(from India) that is not just any casual evening watch. These 5 web-series of India are sure to motivate us, inspire us and stick with us for long.

The Family Man is an Indian Hindi-language action thriller web television series on Prime Video created by Raj Nidimoru and Krishna D.K. Starring Manoj Bajpayee and Priyamani, it tells the story of a middle-class man secretly working as an intelligence officer for the T.A.S.C, a fictitious branch of the National Investigation Agency.

This series is centred on Srikant Tiwari, who is a struggling family man but a star at his workplace. He is part of the brains that stop a terror attack from happening. One of the numerous nameless people who listen to taunts of “arey 26/11 rokna hota toh yeh log rok nahi lete?” while seeing their families slowly crumbling because they are always busy with “files and paperwork”. Family Man is definitely a raw, engaging, well-written espionage drama that will keep you on the edge of your seat.

Take Away – How to keep your professional and personal life on track.

Panchayat is a simple and humorous web series created by TvF, It tells the story of Abhishek Tripathi, an engineering graduate who could not get a good job right after college and ended up as a Panchayat Secretary in a village, that he initially thought as his backup option. Few of the episodes try to cast out issues that Indian villages face like superstition, awareness. And the rest of them focus more on the personal ups and down that Abhishek faces in his journey, as he struggles to keep his preparation and job in line.

Jitendra Kumar, Raghubir Yadav, Chandan Roy and Neena Gupta certainly impress with their dialogues and expressions. Panchayat is a decent watch for people who like movies such as Swades.

Take Away- A dream does not become reality through magic; it takes sweat, determination, and hard work.

The show takes you back to those 60 hours in 2008 when a wounded nation watched as terrorists held it to ransom. Before it was all over, more than 165 were dead and more than 300 injured; the physical and emotional injuries would take years to heal.

The show itself begins with the National Security Guard struggling amid budget cuts. As the army does all the heavy lifting, they have to deal with rationing of weapons and absence of equipment. While their requests fall on deaf ears, a group of terrorists, barely out of their teens, sneak into Mumbai with trekking bags loaded with weapons and ammunition.
So, to sum it up- It is an 8-episode long Zee5 series based on the dreadful attack of 26/11 in Mumbai. The series showed the inspiration and courage of the NSG commandos to protect people from the black tornado.

Take-Away: An invincible -individual is one, who finds the strength to persevere and endure in spite of overwhelming obstacles.

Dr Shreya(played by Shweta Tripathy) is posted in Sitlapur village to conduct a cataract camp. But the villagers aren’t the biggest believers in Government healthcare, the supplies aren’t separate from the politics, and the staff isn’t the dream team one would desire.This series is true to its bits and pieces and gives an insight on how the Indian healthcare system functions in towns and villages.

Take-Away: Do Not Lie to Yourself !
We have to be honest about what we want and take risks rather than lie to ourselves and make excuses to stay in our comfort zone.

This web series is just incredible. This web series has such a simple storyline and at the same time manages to touch a complicated topic that most Indian content shy away from. Rise depicts Shrey – a software firm employee who has been working hard for the last 5 years, leaving trips, skipping parties and not doing shopping just to fulfil his dream of getting a sports bike. And he achieves that, but on the same day his life takes an unexpected turn. How he deals with it is shown in a beautiful manner. When this series ends, you will feel a rush of happiness and satisfaction running through your veins. This is a really underrated series and surely deserves a watch from all youngsters. It is just a 3 hour binge, that can be finished in 1 sitting. Just go for it, Rise !!

Take-Away: Success happens when you are able to use yourself to your full potential, not just in life but also in business.

Final Word:
And, Who doesn’t want to experience success in business(of any kind) ?
But, are you truly doing the right things to get there?