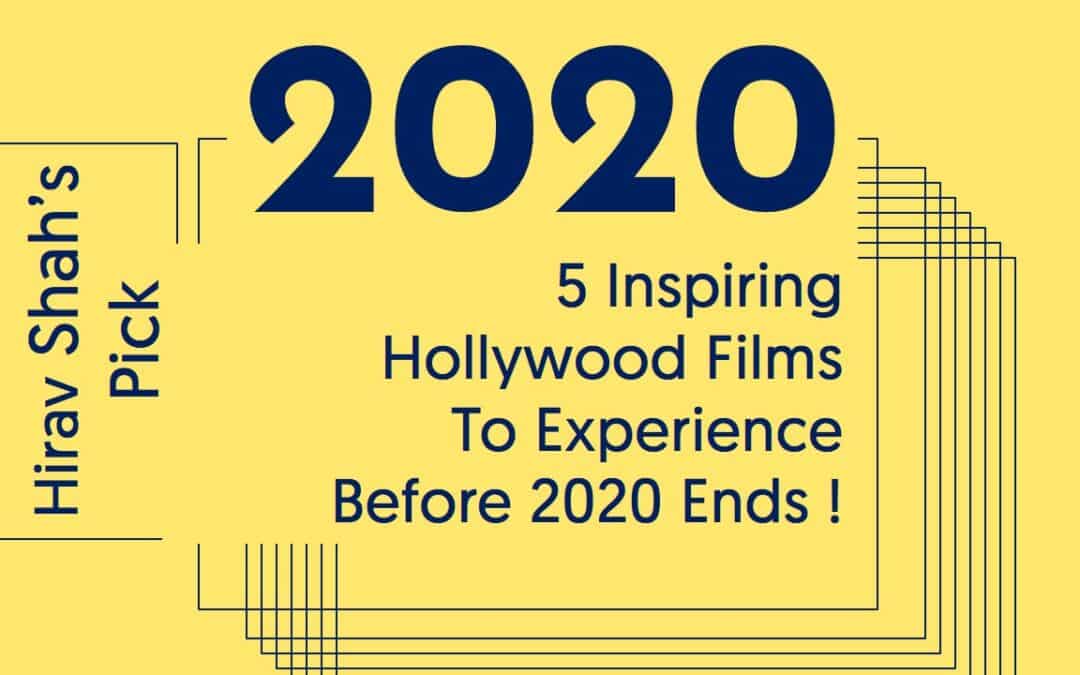 Sometimes, all it takes is watching a film which lifts us up. A rare incredible movie at times, can inculcate passion and strength within us.
We’ve walked into movies and walked out with a different feeling and perspective. Movies have had the potential to motivate and influence people’s decisions. Sometimes, movies could be the motivational ladder to our desired success and productivity at work.
There are movies that inspire and tell how to ‘live’ and how ‘not to live’. Inspirational Movies can make us realize that even a normal person like us has the capacity of doing miracles in life, in career and in business, Opines Hirav Shah, Top Adviser In The Field Of Entertainment.

Looking to shake yourself out of complacency and get a little fired up?

Well, Famed Business Strategist Hirav Shah lists down 5 Hollywood Movies that can motivate you to fire up your future !

Schindler’s List is a 1993 American epic historical drama film directed and produced by Steven Spielberg and written by Steven Zaillian. It is based on the 1982 non-fiction novel Schindler’s Ark by Australian novelist Thomas Keneally. The film follows Oskar Schindler, a German industrialist who together with his wife Emilie Schindler saved more than a thousand mostly Polish-Jewish refugees from the Holocaust by employing them in his factories during World War II. It stars Liam Neeson as Schindler, Ralph Fiennes as SS officer Amon Göth and Ben Kingsley as Schindler’s Jewish accountant Itzhak Stern.

In nutshell, the film is a true story of Oskar Schindler, a German businessman, who saved the lives of more than 1000 polish Jews at the time of the Holocaust by giving employments to all of those people in his office. What is more inspiring in this movie is the power of a common man. Yes, one should not underestimate the strength of a common man just like others.

It is a 2009 American biographical sports drama film written and directed by John Lee Hancock. Based on the 2006 book The Blind Side: Evolution of a Game by Michael Lewis, the film tells the story of Michael Oher, an American football offensive lineman who overcame an impoverished upbringing to play in the National Football League (NFL) with the help of his adoptive parents Sean and Leigh Anne Tuohy. It stars Sandra Bullock as Leigh Anne Tuohy, Tim McGraw as Sean Tuohy, and Quinton Aaron as Oher.

In short, The blind side is a story of Michael Oher. He is a homeless African-American young man. He is taken by the Touhys, a white family and the white family helps him fulfill his potential. When he lives in the white family, he faces a lot of challenges as it is a completely new place to him and new rituals and traditions. He is a student and football player. With the assistance of his coaches, he becomes a good player. What is inspiring in this movie is that, even though the young man lost his home, but he did not lose his spirit and potential, he has tried his fullest to become what he wanted to.

Hirav Shah’s Take-Away from the movie “The Blind Side”:: Do not let anything limit the potential of your future. There are no limits to what you can achieve on your journey through life, except in your mind.

Pumping Iron is a 1977 American docudrama about the world of professional bodybuilding, with a focus on the 1975 IFBB Mr. Universe and 1975 Mr. Olympia competitions. Directed by George Butler and Robert Fiore and edited by Geof Bartz and Larry Silk, it is inspired by a book of the same name by Butler and Charles Gaines, and nominally centers on the competition between Arnold Schwarzenegger and one of his primary competitors for the title of Mr. Olympia, Lou Ferrigno. The film also features segments on bodybuilders Franco Columbu and Mike Katz, in addition to appearances by Ken Waller, Ed Corney, Serge Nubret, and other famous bodybuilders of the era.
Well, Pumping Iron isn’t just a film for body builders. Not at all. It is a movie for people who like to capture the power of assertion and self-belief in action.

Hirav Shah’s Take-Away from the movie “Pumping Iron”: Trust yourself. Create the kind of self that you will be happy to live with all your life. Make the most of yourself by fanning the tiny, inner sparks of possibility into flames of achievement.

4. The Wolf of Wall Street

It is a 2013 American biographical black comedy crime film directed by Martin Scorsese and written by Terence Winter, based on the 2007 memoir of the same name by Jordan Belfort. It recounts Belfort’s perspective on his career as a stockbroker in New York City and how his firm, Stratton Oakmont, engaged in rampant corruption and fraud on Wall Street, which ultimately led to his downfall. Basically this movie will make you re-evaluate your life, and get you aiming for better things.

Hirav Shah’s Take-Away from the movie “The Wolf of Wall Street”: Lead by Example and ‘Set the Standard’ is a life-lesson to take-away from this film.

Limitless is a 2011 American science fiction thriller film directed by Neil Burger and written by Leslie Dixon. Based on the 2001 novel The Dark Fields by Alan Glynn, the film stars Bradley Cooper, Abbie Cornish, Robert De Niro, Andrew Howard, and Anna Friel. The film follows Edward Morra, a struggling writer who is introduced to a substance called NZT-48, which gives him the ability to fully utilize his brain and vastly improve his lifestyle. It’s a film that will arouse you to take action, and yield results in life.

Hirav Shah’s Take-Away from the movie “Limitless”: Success happens when you are able to use yourself to your full potential, not just in life but also in business.

And, Who doesn’t want to experience success in business(of any kind) ?
But, are you truly doing the right things to get there?